Ireland’s shoot-out queens are Tokyo-bound as Ayeisha McFerran added another glorious entry into her own sporting folklore with three incredible shoot-out saves.

It earned Ireland the ticket in sudden death, a first-ever Olympic spot for the women’s team following years of near misses.

After two nights of scoreless, nigh on chanceless, hockey, they finally entered their heart-stopping comfort zone. When all is lost and looking grim, they found that indelible self-belief, borne from last summer’s heroics in London when India and Spain both felt their wrath; a will sharpened by the pain of 2015 when the width of the post ended Rio dreams.

In a direct reversal of the Irish men seven days ago in Vancouver, any slip and they were toast at 3-1 down after three rounds.

McFerran started to make save on save, three in succession, while Beth Barr and Chloe Watkins’ ice-cool finishes sent it to shoot-out.

Roisin Upton’s effort was even more hair-raising, spilling possession but somehow flicking home from inches off the baseline with her eight seconds all but over.

And then McFerran stood firm, keeping out Amanda Woodcroft – the series’ outstanding player – in round six. Of course, it was thrown up to a video review but this time the Gods could not find some way of denying Ireland and the ticket to Tokyo was assured.

Given her record in this region, McFerran would be forgiven for enjoying this form of high stakes torture: “Define love?” she laughed at the suggestion.

“We had full confidence and backed ourselves if it went to shoot-out. It was just down to me to do a job!

“All the years before us, we have learned little things. We stayed focused and didn’t let the scoreboard get to us at all. We stayed calm and did the business.

Other than the shoot-out, neither of the games will live long in the memory.

Saturday’s tie was something of a wash-out, the teeming rain reducing the contest to a slightly unedifying hit-and-hope contest. The conditions mitigating against a free-flowing contest and, bar five Irish penalty corners in the second quarter, neither side was able to get up a head of steam. 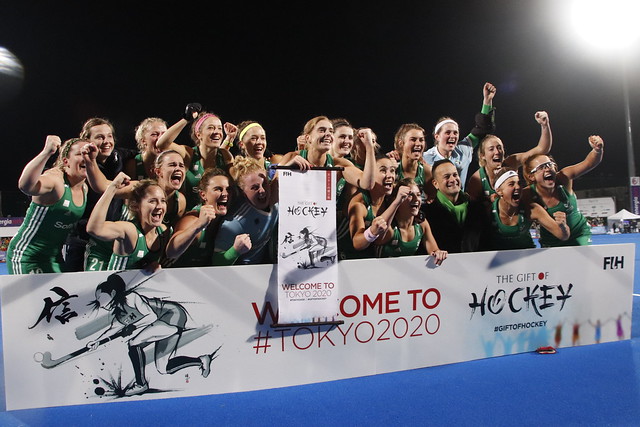 Saturday’s crowd of 6,086 was a record for a women’s international sporting event played in Ireland. That total nudged up to 6,137  for game two.

Indeed, the appetite for the event is all the more remarkable given it was also one of the most expensive events of its kind with Saturday’s covered stand tickets reaching €40 with no free entries for young children.

By contrast, the previous record for the Six Nations clash between Ireland and England earlier this year topped out at €15 while the women’s soccer international 5,328-strong audience saw a mix of €5 and free entries.

It will go a long way to recoup the projected near €250,000 outlay to drop in the turf and, logistically, the event went like a dream for Hockey Ireland.

Last night’s crisp, dry conditions, however, made for the perfect playing environment that should have aided a more free-flowing tie.

Indeed, to help the ball aquaplane around the temporary turf, it required four firemen pre-match to provide extra water as “It’s raining men” blared out of the PA as drier, colder weather greeted the teams.

Ireland deployed Upton in an advanced sweeper role to bolster midfield while the Canadians stepped out of their ultra-defensive press and got plenty of joy from it.

The Green Army made the opening manouveres, Anna O’Flanagan twice having sights of goals denied by Sara McManus’s bravery.

In reply, Maddie Secco had a gilt-edged chance from Canada’s first penalty but Katie Mullan got back to clean up off the line behind Ayeisha McFerran.

And the maple leaf waves continued to roll in the second quarter, led by Natalie Sourisseau and Woodcroft – described by her peers as like a child playing with an oversized adult stick – as the latter’s deceptive reach broke up numerous attacks.

But goals continued to prove elusive with neither goalkeeper unduly concerned in the opening half hour.

And so it continued into the second half, world number 15 Canada looking more composed as Ireland’s play was too long, too often, leaving only scraps for the forward line to feed off with no real momentum.

And on it went. Chloe Watkins was coming into her own through the third and fourth quarters and her machinations set up O’Flanagan to win Ireland’s second corner. Roisin Upton’s shot, though, was charged down at the top of the D without too much fuss and that was it for the Green Army attacks.

Canada, though, could have spoiled the party in the last 30 seconds but Barr brilliantly charged down a couple of last-ditch penalty corners and the shoot-out chance was secure.

“It doesn’t seem real right now,” McFerran finished. “We have been saying it so long that we were going to make it and now it has finally come true and it is bloody amazing; something we totally deserve.”