Sean Dancer admitted “it wasn’t pretty” as the first leg of the Irish women’s Olympic qualifiers double-header in a rain-soaked 0-0 draw at Energia Park in Donnybrook against Canada.

That leaves the ticket to Tokyo hinges on Sunday’s rematch (7.10pm) at the same venue where both coaching teams will hope for a let-up in conditions to allow a more free-flowing affair.

As it was, it was a tie shy on major drama – perhaps thankfully in the wake of the men’s video nasty last Sunday – with, barring five Irish penalty corners in the second quarter, few chances of note accruing.

Nonetheless, the event itself was a record-breaker as 6,086 fans braved the conditions, making it the highest audience for a women’s international sports event played in Ireland, outdoing the Six Nations game between Ireland and England earlier this year.

Shirley McCay became the first sportswoman from the island to hit the 300 cap mark while it was also the first tie in Ireland to use a drop-in pitch, built over five days last weekend with a 100-strong team of volunteers.

This turf, though, has never been tested in such conditions with its first and only previous use in blazing sunshine at the Twickenham Stoop in the spring. 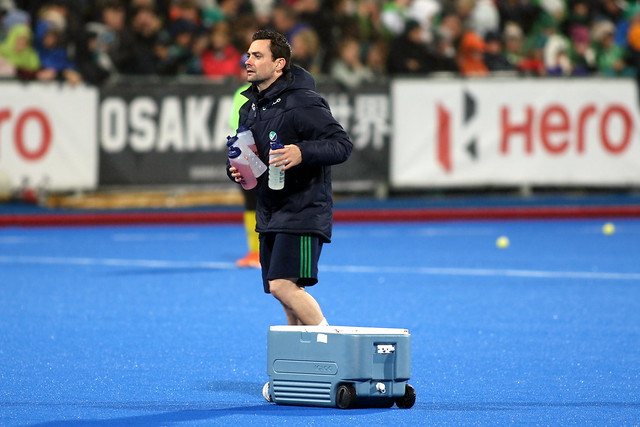 The volume of water made for a slow tempo with limited bounce, making it difficult in the extreme to move the ball at any kind of pace.

That suited the Canadians who sat deep around their D in a chanceless first quarter before Ireland started to pick a few holes, winning those set-pieces.

Roisin Upton and Zoe Wilson both fired goalward with Kaitlyn Williams equal to what came her way, keeping the scoreboard blank. She also kept out a rasping Nicci Daly volley during Ireland’s best phase.

Otherwise, Amanda Woodcroft and Sara McManus were rocks at the base of the visitors’ defence, hoovering up the overly ambitious long passes that Ireland attempted to escape the puddles.

And, from that platform, the world number 15s began to make the marginal best of things after half-time with Brienne Stairs their point of outlet.

Ayeisha McFerran was eventually tested in the 43rd minute, a rudimentary block to Steph Norlander at the back post.

She also had to get down low to deny Canada’s only penalty corner with four minutes left on the clock, ending it scoreless.

For the Green Army and coach Dancer, it means everything is riding on Sunday evening and he says it does not change a huge amount of their outlook.

“It would certainly have been nice to get the win but unfortunately, we didn’t get there,” he said.

“The heavy rain was obviously going to slow the field down; nothing anyone could do about that. You do have to put in a different type of game plan.

“The way the turned out, we couldn’t quite get control in the second half. Canada were pressing really well and we were looking for other options. It wasn’t pretty but we will go back and review it and see what we can do.”

As for the record crowd, Dancer is hoping for more of the same in game two: “It was certainly a very good atmosphere; the Irish support was excellent toward the end of the game when we saved that pc and you could hear that big roar. Things like that are what really spur players on.”