Alan Sothern’s seventh goal of the campaign got Pembroke up and running in the opening quarter before Australian Kieran Springett equalised from a corner with his first EYHL goal since arriving in Ireland.

But second half goals from David Quinn and Patrick Good extended out a 3-1 win for Pembroke to move closer to the top half of the table and away from the relegation places. Railway stay in ninth. 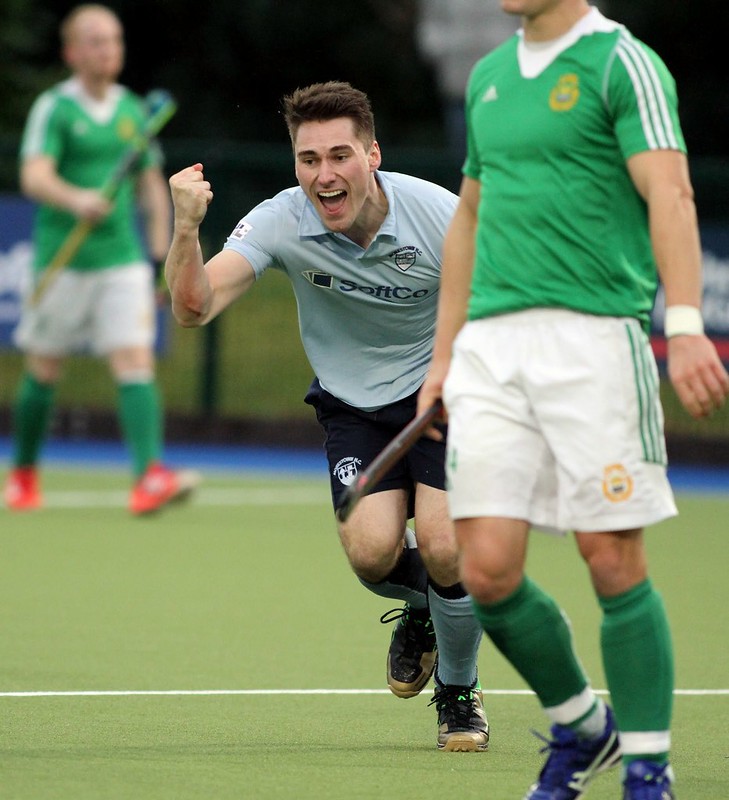 They broke the deadlock 20 minutes in, a long pass picking out Gareth Watkins in plenty of space in the right channel. He squared nicely for a diving Ross Quirke to flick in his debut EYHL goal.

Davy Carson was causing problems all day and he scampered through to hit the post with one effort before getting on the scoresheet on the half hour. Watkins pressurised the Glens’ defence into making a mistake. Carson intercepted, dummied onto his reverse and his tomahawk rifled into the bottom corner.

A couple of Glens half chances were saved by 45-year-old Gordy Clarke who was standing in for Max Maguire who was sitting college exams. Eddie O’Malley did have the ball in the goal but his effort was chalked off for an earlier foot. Two became three in the second half when a beautiful through ball from Carson found a romping Hyland on the top of the D. He steadied himself and slapped low past Leo Micklem.

Stephen Cole then set up Carson with a beautiful through ball for the striker to be set clean through and he finished neatly. With 10 minutes to go, Glenanne fluffed a corner which Nick Dee took quickly, allowing Town to race down the left. The initial attack was foiled but the second wave saw Carson get a deflection that was probably going in but Hyland made extra sure for 5-0.

Shane O’Donoghue got one back with four minutes to fo when he jinked past a defender and finished low with a powerful push for a consolation goal.

The opening quarter was helter-skelter, end-to-end as both teams played the game at a manic pace. Simon Wolfe received a yellow card for a bad tackle but C of I had the edge in terms of early chances.

And they took the lead in the second quarter with an absolute beauty from Julian Dale, netting his ninth goal of the season. It came from route one, a John Jermyn overhead from inside C of I’s own 23m area that was launched over the Rovers backline. One gorgeous touch later from Andrew Daunt, Dale was volleying home, opening his body out perfectly to finish for 1-0.

Jamie Carr was wise to another similar move to deny Dale from another long ball into the circle to limit the scoreline to 1-0 at the break.

The second half proved something of a sea-change in terms of the flow of the game with Rovers having the better of the chances. They got back on terms following a speedy right wing attack that broke to Jody Hosking who slammed home on his backhand.

In the 45th minute, Ross Canning then scored what proved to be the clinching goal. It was a lovely move, Garry Ringwood and Mark Samuel working the ball down the right-hand side and back to Canning who finished well.

C of I had a shot blocked on the three quarter-time hooter as Rovers carried the lead into the closing quarter. The game was becoming very stretched at this stage with both sides having corners, Rovers with one, the visitors with a series of three that were repelled.

No other major chances accrued for either side as Rovers look good on the ball but C of I threatened on the counter but could not forge the leveller.

Lisnagarvey 2 (P Gleghorne, D Buser) Instonians 1 (W Robinson)
Daniel Buser’s third quarter goal saw Lisnagarvey end their wait for a win, lifting them up to fourth place in the table. They started the tie strongly with debutant Michael Robson prominent in midfield but Inst defended well to keep it scoreless into the second quarter.

There, both teams pressed hard and Garvey got their reward from a second corner with Paul Gleghorne dragging low to the right corner to score against his former club. Inst responded well and were rewarded when a stick-tackle led to a corner that William Robinson flicked home – 1-1 at half-time.

Garvey pushed on in the second half again and got back in front when Matthew Nelson broke strongly into the circle and fired a reverse-stick cross for Daniel Buser to deflect into the goal. It came while Inst were down a man for a yellow card offence.

Nelson went close to making it 3-1 in the closing quarter while Inst replied in the closing minutes with a concerted push for a leveller which never came. It leaves them on one point after eight games.

Banbridge were 1-0 up inside a couple of minutes as Jonny McKee got free down the right wing and had time to pick out Dane Ward for a simple finish. McKee was a real nuisance throughout and he added the second on 12 minutes with a thunderous strike following a turnover in midfield that was ruthlessly punished.

Matthew Bell added a third from the penalty spot after Bruce McCandless’s brilliant run and cross led to a foul on the intended striker. Ward then got his second and Bann’s fourth in the 28th minute from another sloppy clearance, McKee taking his time to pick out Ward who rolled home.

David Nolan gave UCD a lifeline with a scrambled effort and Ben McCrea’s drag-flick made it 4-2 early in the second half to up the ante. Bann wasted a plethora of chances as Stephen Dawson impressed between the posts but the game was effectively killed off when Bell’s heavily deflected drag-flick made it 5-2.

Ward completed his hat trick in the closing minutes when he smashed home into an empty net after Dawson had denied Neil Gilmore, who was playing his first game since returning from Portadown.