The signs had already been ominous before Peter Brown got them up and running in the sixth minute. Two minutes later, Dane Ward applied a composed finish on his backhand for the second as Bann ran riot. Frazer Mills scored the third in the 19th minute when Bruce McCandless was able to ease into the circle before having two bites at crossing to Eugene Magee to tap in from close range.

Goalkeeper Stephen O’Keeffe made a series of brilliant saves during this half to limit the damage as well as forcing Peter Brown and Jonny McKee to both shoot into the side-netting. The fourth goal, however, came from Matthew Bell’s drag-flick.

The second half was a more sedate affair with Railway enjoying more of the play as Bann’s relentless pace slowed. The hosts did have a goal disallowed in bizarre circumstances as a shot ricocheted off a Bann foot and dribbled toward goal where Gareth Lennox somehow contrived to fresh-air his kick.

The ball just cleared the line but umpire Robert Johnston – with no possible way of predicting the miskick and envisaging the unlikely advantage – had blown just before for the corner. Bann’s defence held firm at that corner and a couple of others to stay 4-0 clear.

Monkstown 2 (K Good, R Sykes) Lisnagarvey 4 (A Williamson 2, M Nelson, M Robson)
Andy Williamson’s pair of third quarter goals saw Lisnagarvey win a cracking encounter between two of the league’s leading lights. The first half simmered with the pace of Matthew Nelson and Gareth Watkins proving a feature while a high quality midfield battle was played out with Neal Glassey’s robust skills a strong element in a trio with Sean Murray and Michael Robson.

He drew a top save from Max Maguire before setting up the opening goal for Nelson, a driving run and cross from the right that the recently capped teenager dove onto for a fine goal.

When given space, Watkins was at his direct best and his brilliant run led to an opening corner that James Milliken did well to parry away from Lee Cole’s drag. He also earned Murray a green card for a loose tackle with his quick hands on halfway.

Garvey had a big chance for number two on the hooter but Daniel Buser could not get a clearn strike on a bouncing ball from a corner rebound.

It laid the base for one of the best halves of hockey this season with the latter 35 minutes sweeping from end to end at an incredible tempo. Kyle Good levelled in the 40th minute after Stephen Cole’s excellent steal on the left wing, feeding his Irish team mate who pumped home a rocket from top D. 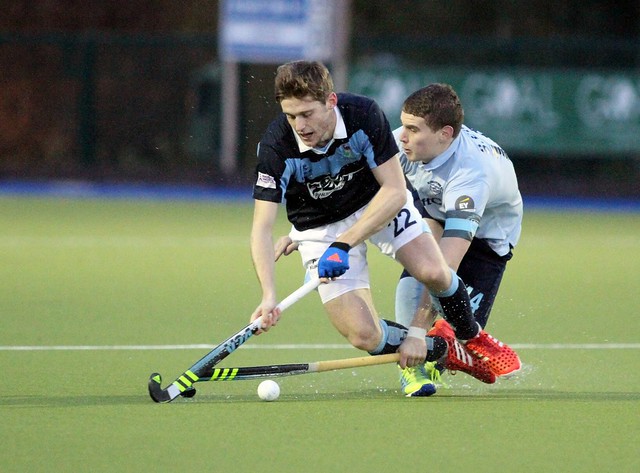 Watkins and Davy Carson combined at speed to go close to taking the lead but Garvey counter-punched. Richard Arneill put in the diagonal cross from the right that Williamson dove onto. Maguire saved it but Williamson, in a flash, got back to his feet and regathered the ball to slam home.

His second came soon after as Nelson evaded a tackle on halfway and used his pace to set up a big overload. He slipped to Williamson to flick home for 3-1 at three-quarter time.

Richard Sykes got the game back into the balance with a corner drag and Town had a couple of big opportunities to draw level with Watkins and Stephen Cole shooting over from narrow angles when a low cross might have been the option.

And, with five minutes to go, Garvey clinched the win. Buser had three chances to shoot – his coach Errol Lutton and manager Dean Beckett imploring him to do so – but delayed long enough for Robson to arrive. His cross took a heavy deflection and nestled in the corner for 4-2.

Cork C of I 2 (S Parker, J Jermyn) Glenanne 1 (E O’Malley)
John Jermyn’s third quarter goal earned Cork C of I their fifth win of a productive first half of the campaign, seeing them jump above Three Rock Rovers – whose tie was postponed due to frost – into fourth place.

The game opened at a frantic pace. In the opening minute Julian Dale forced a mistake from the Glenanne defence but saw his shot crept inches wide of the far post.

Jonny McKee gets away from a couple of tackles to create a shooting chance. Pic: Adrian Boehm

In the 14th minute John Jermyn intercepted a loose ball outside the 23 and found an unmarked Stephen Parker who slotted the ball under Ian Clarke in the Glenanne goal. A minute later Parker turned from hero to villain when his careless pass in midfield was intercepted and, from a clever move, Eddie O’ Malley finished at the back post from a pin point cross.

Buoyed by the late goal Glenanne started the second quarter on the front foot. They won a number of penalty corners but these were repelled by Billy Lynch in the C of I goal.

Just before half time some good work down the right wing by Stephen Sweetnam saw his cross whizz past the back post. Glenanne were awarded a penalty corner on the half time hooter but Shane O’Donoghue’s flick was well saved by Lynch in the CI goal, keeping the tie level at the break.

Into the second half, Glenanne had the home side pinned in for long periods but CI were dangerous on the break with Andrew Daunt and Alex Burns breaking quickly.

In the 52nd minute Daunt forced an error to win a penalty corner. Up stepped Jermyn who slotted his flick high to the Clarke’s right. From there, Glenanne laid siege to the C of I goal with Stephen Parker taking a yellow card to up the ante.

The Dubliners won a spate of penalty corners but O’Donoghue had no answer to the Man of the Match Billy Lynch in the CI goal, their hopes of grabbing an equaliser proving frustratingly out of reach.