*With thanks to Alan Good

Ulster claimed the boys’ U18 interprovincial title with a day to spare after a topsy-turvy set of encounters at Shaw’s Bridge today.

That came this afternoon against Ulster, when the events of a controversial final few minutes scuppered Leinster’s hopes.

David Carson had cancelled out Stephen Dowds’ effort to leave the sides tied at 1-1, and Leinster thought they’d 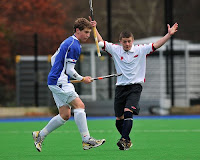 won a late short corner for a foot in the circle.

They remonstrated forcefully with the umpires, in turn leaving themselves wide open at the back, and Ulster gleefully took advantage, with Peter Purcell finishing off a breakaway goal to give his side a 2-1 win.

Meanwhile, Munster’s hopes faded in the last game of the day, as Ulster soaked up a ton of pressure before Niall Kelly hit the winner that sealed the championship for them.

There was better news for Leinster in the U16 tournament, which they have all but wrapped up following a 4-0 demolition of Ulster yesterday, with a brace from Fingal’s Mark Ryan taking his tally to three in two games.

Ulster and Munster later fought out a 2-2 draw, with Richard Lynch and Darren Sweetnam’s goals ensuring the southern province shared the spoils after going 2-0 down to

That result means Ulster cannot catch Leinster, while Munster must better the 5-0 defeat Leinster inflicted on them on Friday night in the return fixture tomorrow – and hope Ulster sneak a win over Leinster in the final game of the day – to stand any chance of taking the title.