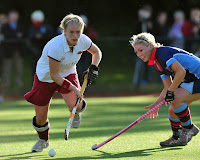 Group A
Saturday
Belfast Harlequins vs Cork C of I, 2.30 Deramore Park, (Umpires: Gail Taylor, Jennifer Drewitt)
CI’s 1-0 win over Randalstown in week one of the IHL should give them confidence against what has been an inconsistent, youthful Belfast Harlequins this term. Mel Ryan scored the winner at the Cork-side missed a host of chances against a side that is still unbeaten up north in league action and so logic would dictate a win over Harlequins is on the cards.

Loreto wrapped up their win over Quins in the opening quarter but they showed enough in the game’s latter stages, with Jenny McDonough driving them on, to show they can do some damage on home turf.

Railway Union vs Randalstown, 6pm, Park Avenue (Zena Howe, Catriona Hassey)
Saturday evening’s focus will definitely be on Park Avenue as Railway play host to the only evening tip-off in the province, giving allcomers the chance to watch some IHL action. It worked up north in Banbridge with over 700 making in attendance.

On the field, Railway will hope to get their semi-final bid on track after a narrow 2-1 defeat to the country’s top dogs, Pegasus. On home turf, they should have the upper hand though they are playing a side unbeaten in domestic action. Railway have both Leinster’s top scorer – Jean McDonnell – and the most miserly defence in the league with just one goal conceded, with former Belfast Harlequin’ Helen Stevenson minding the net.

Sunday
Loreto vs Pegasus, 3pm, Loreto Beaufort (Carol Metchette, Lynn Morrow)
Undoubtedly the tie of the round, Loreto’s quintet of Irish players mean they will not suffer for quality though Pegasus’ form up north has been nothing short of scintillating. 39 goals in seven games just one conceded with the likes of Armagh, Ballymoney and Belfast Harlequins summarily dismissed. 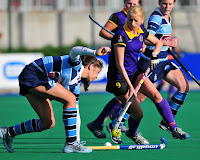 Former internationals Jill Orbinson and Arlene Boyles are back in after missing round one and will hope of repeating the 5-2 win in last season’s ISC semi-final. Loreto, meanwhile, have their internationals in action for the club for the first time since November 8 but still managed a cup win over Pembroke II last Sunday.

POOL B (All Saturday)
Armagh vs Hermes, 2pm, Ardmore Leisure Centre (Laura Callaghan, Jennifer Hobson)
Irish club champions Hermes face a journey into the unknown as they face Armagh for the very first time. They do so with Irish legend Jenny Burke back in action to add experience to their young line-up, having played a useful friendly under IHL rules against UCD on Wednesday night. They will also hope the bug that affected Chloe Watkins last weekend will have cleared up.

Armagh, on the other hand, have struggled this term and still face hockey life without a number of their stars. Amy Stewart and Stephanie Quinn are recovering from long term injuries but Rachel Mulligan is back in the line up after injury. 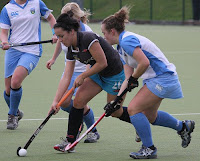 UCD vs Ballymoney, 4pm, Belfield (Gerry Kotze, Nigel Brislane)
Another legend makes her return this weekend as Lyndsey McVicker returns to the Ballymoney line-up after her honeymoon against a miserly UCD side. Under Mary Logue, they have developed a side conceding very few against the top sides, picking up a 0-0 against Hermes and letting just one goal and no corners against Railway. Ballymoney go into the game with three wins and three losses in the Ulster league.

Cork Harlequins vs Pembroke Wanderers, 1pm, Harlequin Park (Julie Beamish, Liz Clifford) Cork Harlequins will hope their recent defeat at the hands of UCC is more of a blip than a sign of decline after so many years of dominance in the South. To that end, Quins’ will need to keep Louisa Moore at bay if they are to prevent Pembroke from a second successive win and avenge the fate of their men’s side.