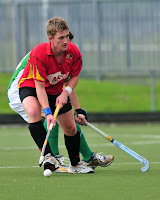 Group A (All Saturday)
Cookstown vs Annadale, 6pm, Coolnafranky (Umpires: Kieran Bolger, Colin Hutchinson)
The battle of Ulster’s top two in Tyrone could prove one of the pivotal ties in what, already, looks to be the tighter of the two groups. Cookstown will miss former international Andy Babrbour but their young charges are bouyed by another of their number, Colin Donaldson, stepping up to national level. A 4-2 win for the Tyrone side earlier this season and last season’s title breaking Annadale’s domestic dominance should see Cookstown as narrow favourites.
Cork Harlequins vs Glenanne, 3pm, Harlequin Park (R Johnston, Chris McConkey) Quins and Glenanne face off in a game traditionally filled with fire and brimstone, with 13 goals in their last two enocunters with plenty of cards to boot. Glenanne came back from 3-1 down to win in the 2007 ISC semi-final and a 3-3 draw in the club championships last term laid waste to Quins’ chances of a semi-final berth.
Paul Lombard picked up a red card in that game which means he is suspended for tomorrow’s clash, with John Hobbs taking over the captaincy in his absence. The Glens, meanwhile, have Stephen Butler back in action after missing last weekend’s Irish series against Scotland due to work commitments.
Instonians vs

Pembroke Wanderers, 6pm, Shawsbridge (Graham Caulwell, C Beattie)
Another match-up between sides with plenty of water under the bridge, Pembroke will hoep they can kill off Instonians. The ISC saw a 3-0 lead evaporate in a few crazy minutes before the Serpentine Avenue team eventually won their ISC tie on golden goal.
Tim Lewis is out after his gruesome facial injury while on Ireland duty and Inst wait on the fitness of Mark Gleghorne and Stephen Redpath. Paddy Brown, however, does return. As in the Cookstown match, Inst have chosen for a late tip-off. This worked to excellent effect in Banbridge’s first IHL match with over 700 people turning up to spectate.
Group B (All Saturday)
Fingal vs Three Rock Rovers, 1.45pm, ALSAA (S MacAllister, Dan Clarke) 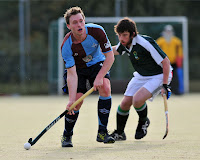 Returning to the scene of a 2-1 win two weeks ago, Rovers go into the Dublin derby in full confidence after a good win over Monkstown with a long absentee list. Ali Haughton, Neil Lyons, Mitch Darling, Charlie Henderson and Phelie Maguire all return to the squad but Peter Blakeney is a doubt with a shoulder injury.
On the Fingal side, Ben Chillingworth is still out. Paddy Gahan, Chris Neville and David Bane all carry niggles but should be ready in time. Three Rock previosuly had a mental block at ALSAA but have managed to overcome such worries in recent years and take confidence into what is likely to be a cagey, tight affair.
Banbridge vs Cork C of I, 5pm, Havelock Park, (D Stewart,Warren McCully)
Banbridge’s home tie with Lisnagarvey proved one of the highlights of the IHL opening round and, while the time is slightly earlier, the later tip off should again ensure a good turn out. CI have Mark Ruddle back between the posts after a lengthy injury battle and Johnny Bruton makes an instant return to the scene of his international debut.
Eugene Magee will be the one to watch for the Corkonians. He was in breath-taking form against Scotland while Geoff M 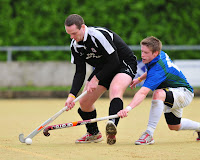 cCabe also produced some of best form in an Irish jersey. They are unbeaten in league action but four draws out of six has cost them a higher league place.
Monkstown vs Lisnagarvey, 4pm, Rathdown (A Shute, Kris Cholewa)
Lisnagarvey have a chance to gain revenge for the ISC semi loss last term as they visit Rathdown when Ian Allen’s late strike won a memroable tie. ‘Garvey go into the game bouyed by their win against Banbridge, on strokes, in the Kirk Cup semi-final while the Town suffered their first loss of the campaign on Tuesday night.
Domestic weekend preview
IHL Women's Preview