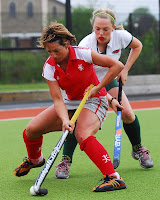 One of the key factors in the success of the IHL is making hockey an exciting spectacle for spectators, to not only gather together the current hockey community but to bring in supporters from outisde.

This will happen in two main ways. The first is that the clubs make the effort to create impressive match day events for all generations. It places a lot of emphasis on volunteerism and so it is really important that club members bond together to make it work on this level.

The second level is the effort to make the hockey as exciting as possible. This will rest on the shoulders of the players and their co-operation with the umpires during matches.

As Ray O’Connor explained in the meeting, a number of new rules – based largely on the EHL regulations – are being brought in with the premise to “entertain, entertain and entertain. The idea is to make the game more exciting and that means more playing time.” It also means that for teams attempting to ‘break’ the game down, penalties are more severe.

As such, five main changes have been introduced:

1) Match time – matches will now be divided into quarters of 17 and a half minutes with a two and a half minute break at the end of the first and third quarter. Half-time remains the same. This was initially introduced for television purposes – to show adverts and replays and so on – to the EHL but coaches in the main liked the possibility to talk more to their players.

2) Penalty corners – players breaking the line at a corner will be sent to the halfway line for the next corner. Similarly, if the injector attempts to dummy a push-out to get a runner to break the line, they will be disallowed from pushing out the next corner.

reen cards are now a two-minute suspension. To ensure players serve the exact time, the TD’s bench will hold their stick for the exact time and return it to the player when the suspension is finished. Yellow cards remain the same punishment but umpires will communicate with the TDs as to how long the punishment will be and inform the coaches.

4) Free hits within the ‘dotted line’ – Free ins will now be brought back to the dotted line, five metres outisde the circle for safety reasons.

5) The self-pass – Players are allowed to pass the ball to themselves to get a game restarted once a free has been given. The ball must travel one metre and both sets of players must be five metres away from the ball, other than the free-taker.

A couple of other EHL regulations have not been brought in at this point. Video umpires are not yet feasible while radio communication between umpires will not be in place. An interesting suggestion at the launch, though, that if the host club can supply walkie-talkies or some 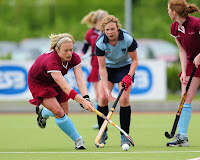 thing similar, would they be considered for usage?

O’Connor also outlined a number of issues that the umpires will be focusing on during the tournament. They are:
– bad tackles and breaking down the play
– free hits around the circle
– obstruction/blocking/screening at penalty corners
– player’s protesting
– both personal and technical penalties used against players.
O’Connor concluded by saying “an umpire will never give out to a player of manager. We’d expect the same in return.” It is a point well made. The co-operation between player and umpire will be vital in the early stages of the competition.
Whilst there has been a few trial runs – Three Rock’s Tempest trophy and Monkstown hosting Annadale to name a couple – everybody will be getting used to the new rules and situations that arise. For us to make this work, requires patience from everybody.
Hopefully, that explains everything clearly. These are exciting times, lets band together and make sure the IHL is the best it can be.
Irish Hockey League launched
Harlequins to feature on Sports Nationwide