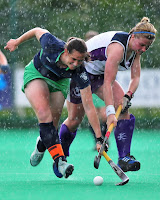 Thunder and lightning came to Ireland’s rescue as a rather aimless pre-weather break performance was counter-acted by a superb battling effort once the players emerged from the dressing rooms for the second time at Garryduff.

For the second day running, a mass downpour left the Cork venue’s pitch flooded in parts, leaving the umpires little option but to put the game on hold for 15 minutes. The only consolation for the sizable crowd was that the lack of wind meant the rain was not slanting into the main stand’s face as the heaven’s opened.

Ireland had the better chances in the first half, hitting the post from a corner strike inside four minutes, but chances were few and far between. Indeed, Scotland edged g 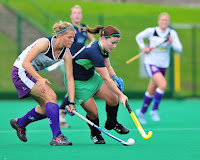 eneral play and took the lead six minutes after the break Alisa Robertson played in Holly Cram to round Louisa Healy and scramble the ball home.

Robertson nearly doubled the advantage moments later but her reverse was smothered by Healy before Emma Stewart eventually cleared the danger as the Scots looked in rare form amid the rain. The pause broke their momentum, though, and Ireland, driven on by Shirley McCay, were rejuvenated. 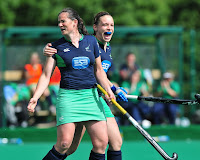 r Cregan bashed in an angled drive from a mis-stopped corner to deservedly equalise, closing out the game 1-1.

In the early game, Wales turned on the style in the second half to win 4-2 against France with some stylish goals from Lucy Shepherd and Leah Wilkinson. The sides were locked at 1-1 at half-time but the Welsh produced some tidy play to build a healthy 4-1 lead before a cracking reverse from Philippine Berly salvaged some French consolation four minutes from time.