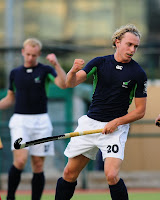 Ireland wrapped up a facile win against the country that has caused them untold anguish in recent tournaments, overcoming a disappointing French outfit 5-0 amid lashing rain in Garryduff.Dave Passmore’s side, indeed, missed a couple of clear-cut chances to give the scoreboard an even greater gloss.

Tim Cockram opened the scoring 11 minutes in from Eugene Magee’s cross before Three Rock’s Mitch Darling scored another for his ever expanding scrapbook – though it proved a controversial effort as he volleyed home a shoulder-high cross from Michael Watt.

The second half saw the traffic continue to flow toward the French goal. Tim Lewis deflected in Stephen Butler’s drag-flick to make it 3-0 after 41 minutes before Passmore introduced Jason Lynch for his debut cap.Alan Sothern made it 4-0 with a crashing shot past Maxime Wilson after excellent, fast build-up play between Gormley and Cockram. 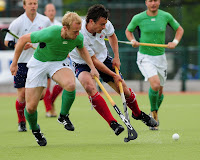 tanding water on the pitch but the captains agreed to finish the game out.It mattered little as Ireland pressed forward once more, having a corner disallowed and Magee blazing over before Butler completed the rout to extend his national goal-scoring record in a facile 5-0 win.

Earlier, Rick Gay claimed a hat-trick of penalty corner goals as Wales recorded a 3-1 win over Scotland, for whom Allan Law scored a consolation, in their Celtic Cup opener.