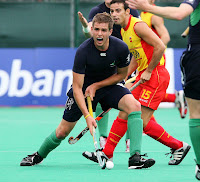 Cork C of I’s John Jermyn, along with former Annadale player Iain Lewers, will be hoping to make history this weekend and become the first ever winners of the Euro Hockey League.

The tournament, akin to football’s Champions League, is the pinnacle of world club hockey and, in its inaugural year has attracted the world’s best players and some huge crowds.

And the Irish duo will take the pitch next Saturday in Rotterdam in the final stages for their Dutch club, HGC, with the intention of lifting the ultimate prize.

The former Ashton schoolboy arrived in Holland at the start of the season, looking to try out a new hockey-playing experience after finishing his studies last year with the opportunity to test himself at the highest level proving irresistible.

Jermyn – an Irish international of several years – first came to the attention of HGC coach Paul van Ass through another Irishman who pioneered playing semi-professionally in the Netherlands .

Phelie Maguire joined the Hague-based club last year and proved a hit with the club, helping the side to second in the table.

His involvement opened the door for the pair to try their hand with a club which featured Dutch legends Guus Vogels and Bram Lomans – both owners of a slew of world and Olympic medals.

Maguire made the introduction to van Ass, the HGC trainer, who subsequently went to watch the Irish duo at friendly matches in Germany for their country and subsequently at the Euro Hockey nation’s championships in Manchester last September.

They impressed and have since been central members of the squad with Jermyn part of the penalty corner unit. 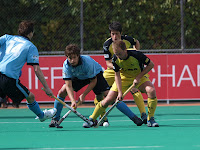 They play in the Dutch national league, known as the world leading club competition until the advent of the EHL, with internationals from all over the world taking part.

And Jermyn cannot speak highly enough of his club coach. “He wouldn’t go too much in depth tactically into a game but it would be all about the mental side. I suppose I never really thought about the mental aspect. He’s great at man management. Like if he saw you were tired, he’d tell you to go back home and recharge.”

And Jermyn has relished every minutes of competition since, especially the EHL: “The hockey is brilliant. It’s a lot more physical and the umpires let a lot everything go so it’s such a fast pace. It’s the best tournament I’ve ever experienced.

“It’s similar to an international tournament with the standard of players. In the first round we had home advantage but not many gave us a chance against German side Club an der Alster. But we went out and beat them 3-1.”

Jermyn was on the scoresheet in a 6-1 demolition of Russian side Dinamo Kazan in the last 16 before HGC beat Spanish Terassa in Spain .

That win in March qualified for the final four playoff stages, which take place over one weekend in central Holland .

They face Dutch rivals and host club Rotterdam on Saturday in the semi-final with a win leading to a final place the next day against either German outfit Uhlenhorster or Spain ’s Egara – who put paid to Ireland ’s only club entrant, Pembroke Wanderers 3-2.

But Jermyn is facing a race against time to recover from a fractured toe sustained in a league match three weeks ago but is hopeful it should hold up with extensive strapping.

And while Jermyn’s team has twice been beaten by Rotterdam this season, events have conspired in their favour.

HGC’s talismanic striker Barry Middleton has been given a special dispensation by Great Britain to play while Rotterdam ’s trio of New Zealanders have not being released.

“That could be the difference, Rotterdam are probably the strongest side left in the competition and their forwards are unreal but if we can win we would fancy our chances in the final.”

It heaps the pressure on world-record goal-scorer Sohail Abbas – who was scored in excess of 300 international goals for Pakistan – to perform but if he is kept quiet, Jermyn could be on his way to an incredible achievement in hockey’s most elite club event.

I originally wrote this for the Cork Evening Echo, hence the Jermyn bias!