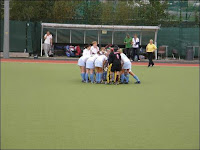 UCC overcame a spirited UCD to retain the Chilean Cup in Belfast, dealing the Dublin university their second Intervarsity defeat of the day.

In a repeat of last year’s final, Irish international Julia O’Halloran opened the scoring early in the first half, flicking powerfully into the top corner and Holly Moffett sealed the victory ten minutes from the end; beating three players before blasting home from the top of the circle.

UCD pulled one back with virtually the last touch of the game, Marie O’Connell firing home a short corner.