Ireland’s men and women will travel to opposite ends of the world in their quest for Olympic qualification. The men have been drawn in a qualifying tournament based in Auckland, New Zealand starting on February 2nd 2008 where they will compete against Pan-American runners-up Argentina, hosts New Zealand, Cuba, Trinidad and Tobago and their nemesis from the recent Euro championships, France. The women, meanwhile, go to Victoria, Canada to face hosts Canada, Cuba, Italy, Malaysia and world number 9 side Korea. Their campaign gets underway on April 26th 2008

In both cases, Ireland must win the tournament in order to claim one of the last three places available for the Olympic hockey tournament in Beijing. The women would appear better placed to qualify. The Irish are the second highest ranked in side in the group in fourteenth, five spots below Korea. Indeed, coach Gene Muller admitted before the European Championships that his main focus was Olympic qualification, saying “You have to think beyond the Europeans. We are unlikely to achieve a top 3 placing… I still view the Europeans as a dress rehearsal for the Olympic qualifiers – it’s the realist in me.”

The men will expect to beat Cuba and Trinidad but face two top-ten ranked sides in New Zealand (10th) and Argentina (7th). The French encounter also represents a gru

dge match especially after last month’s bad tempered 1-0 defeat at the Euro Championships. The men’s side were disappointed to be relegated to the B division as a result of that loss despite good outings against Spain (1-1) and the Netherlands (0-1). Men’s coach David Passmore said “We will take huge confidence from the performances against Spain and Holland towards the Qualifier. We know now we can mix it with the best and have a chance of qualification for Beijing.”

France’s assistant coach Franck Grondin admitted after the win in Manchester that his side targeted the Ireland match as their key to success and were unconcerned by hammerings in their opening two games. So, were Ireland naive to chase glory against the big teams at the cost of their A division status? Renewing rivalries so soon will be a real test of the Irish management. 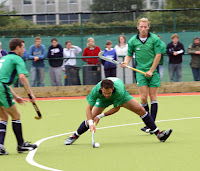 Think we are going to qualify for the Olympics? Looking forward to a trip half way around the world? Have your say…

Rough Guide to the Euro Hockey League – the future of hockey?
YMCA