Irish Captain, Linda Caulfield, has decided to draw a line under her international hockey career after amassing 151 caps and wearing the green shirt for nine years. Caulfield cited work reasons as the deciding factor, saying “there is a huge demand on players to increase their time on the pitch and the intensity of their […]

Railway Union continued their impressive start to the Leinster Ladies league, scoring 75% of the goals in the five women’s games played on Saturday. They outplayed Three Rock to record a comfortable 3-0 win, Jean McDonnell scoring twice. Barbara Fitzgerald scored the only other goal of the weekend as Alex beat Corinthian. In the men’s […]

Four Leinster sides have been handed home draws in the Women’s Irish senior cup. Three Rock, Genesis, Pembroke and Trinity all face northern opposition in the first-round. The first round matches take place on the 20th of October. Last season’s club championships participants have received byes through to the 3rd round, meaning Loreto, Hermes and […] 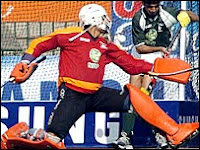 One of the features of the preseason has been the movement of goalkeepers between the clubs – some amicable, others perhaps not… Most of the action has centred around Pembroke, due to their overload of quality keepers. The first set of rumours had Charlie Henderson moving back to his old club, joining up with his […]