Lisa McCarthy is the one Leinster name to be included in the Irish U-17 panel named on Thursday to participate at the first World Youth Olympic Games which are being held in Singapore in August. The Mount Anville teenager has had an impressive season, making it to the edges of Railway Union’s IHL winning panel […]

Eight Leinster players have been included in the 18 man Ireland A squad named by Graham Shaw for the upcoming Junior Celtic Cup, to be played in Cookstown from July 2-4. Speaking about the selection, Ireland’s Senior men’s coach Paul Revington said “It is crucial for Irish Hockey that this group of U-21 players are […]

** Words from Helen Johnston ** The Irish women’s masters (over 40s) played their first tournament last weekend, taking part in the Masters Home Countries International Hockey Championships in Swansea, Wales. Due to the sterling efforts of the men’s masters co-ordinator Andy Nye and the women’s co-ordinator, Alison Pigot. a squad of 13 was assembled […]

Ireland ‘A’ Women’s coach, Guy Garrett, has announced his squad to play in the Junior Celtic Cup on 2-4 July, 2010. The tournament is limited to U-21 players and so the squad selection reflects this. Speaking of the upcoming tournament, Coach Guy Garrett, said that, “Preparation has been very intense and the players have worked […]

Ireland will field an U-17 girls team at the inaugural World Youth Olympic Games in Singapore this August, it was revealed earlier today. The Irish Hockey Association’s high performance director Dave Passmore will lead a 16-strong squad to the tournament in Asia, having officially secured its place in recent days. They will challenge for Olympic […]

The international summer gets underway later this month as Ireland compete in 55 fixtures across eight squads from late June to the end of July with the boys and girls U-16 panels taking part in their major event, the European Nations Cup in Barcelona, both competing at A division level. The women’s senior team will […]

Ireland bounce back to conquer Chile

Needing a draw to win back the Celtic Cup, Ireland just missed out on the prize as they fell 2-1 to Scotland in Nice yesterday; a month before the sides meet again in the World Cup Qualifiers. The Scots took the early initiative, controlling much of the first half and scored the only goal of […]

Ireland showed their resolve as they twice bounced back twice to record an impressive 3-2 opening day win over hosts France in the Celtic Cup. The Irish were behind inside 20 seconds as the heavens opened on the Cote d’Azur, leading to a farcical opening goal on a water-logged pitch with French forward Charlotte Boyer […]

Gene Muller has named his 18 player panel for this weekend’s reduced Celtic Cup after Wales pulled out of the competition in Nice. The tournament serves as one of the final battlegrounds for Irish players to stake their claim for inclusion next month’s World Cup Qualifiers in Chile Speaking about the fixtures against France and […]

Ireland’s men will travel to Argentina for their World Cup qualifier, the FIH has confirmed this morning, for the tournament to be played from November 14-22. They are the third ranked side in the six team group with Belgium, USA, the Czech Republic, Chile as well as the hosts. The Belgians represent the friendliest of […]

Ireland 1 (Lisa Jacob) Russia 1 (Olga Shentsova)In the final reckoning, the crucial statistic was that Ireland got the point they needed to survive in the A division, ultimately earning a fifth place to equal the country’s best ever finish in the competition – the other time being in Dublin in 2005. A couple of […]

Following a review, Nikki Symmons has been cleared to play in Ireland’s final EuroHockey Nations Championships against Russia tomorrow morning (7.30am, Irish time). The midfielder received yellow cards against both Spain (dissent) and Azerbaijan (breaking down play) which made her liable to receive a one-game suspension and limit Ireland to four substitutes for their next […]

Ireland 2 (Nikki Symmons, Alex Speers) Azerbaijan 1 (Zhun Mammadova)Ireland moved to the verge of survival in the A division of European competition for 2011 thanks to Alex Speers’ 64th minute goal against Azerbaijan today. It means Ireland need just a draw in their final relegation pool game against Russia on Saturday morning (7.30am, Irish […]

Ireland’s schedule for their relegation dog-fight sees them pitted against Azerbaijan at 1pm (Irish time) on Thursday afternoon before tipping off the women’s classification final’s day at 7.30am (Irish time) on Saturday. The series was decided late on Tuesday as the Netherlands late surge of goals against the Russians meant they swapped positions in the […]

Ireland 1 (Cliodhna Sargent) Spain 4 (M Cruz, O Piniero, E Termens, S Bonastre)The final reckoning shows Ireland missed out on a first ever EuroHockey Nations Championships’ semi-final due to their 4-1 loss to Spain. Though their performance certainly did not merit that margin, results are what count and Ireland’s inability to put away more […]

* Story has been amended since original post due to a timing error! Apologies for any inconvenience caused… To catch Ireland’s crucial match with Spain on Tuesday, your best bet is still to try and watch it online. The other links for live streaming online that I have to hand are from hockey.nl and NOS […] Ireland 0 Scotland 0Ireland flirted with disaster in their second group game against Scotland but ultimately were the side who came closest to stealing all three points after a second half onslaught. As such, combined with Spain’s 2-1 defeat to Germany in the day’s second game, the difference between one and three points does not […]

Ireland 0 Germany 7 (A Kuhn, N Keller, F Rinne 2, M Stockel 2, J Muller)Ireland endured a torrid opener to their EuroHockey Nations Championship campaign as they were on the receiving end of a 7-0 thrashing from reigning champions Germany in Amsterdam this afternoon. It was never likely to prove a crucial result for […] 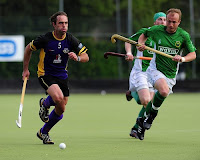 The likelihood of both Glenanne and Pembroke’s international players being available for the EuroHockey League’s opening rounds was given a huge boost as both were confirmed to play in the first of the two weekends of group stages. Both clubs will play in Barcelona on the weekend of October 9 to 11, giving at least […]