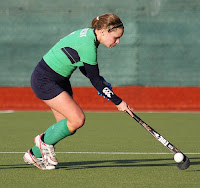 Gene Muller has opted to take an extra defender to the EuroHockey Nation’s Championships in Amsterdam next month as he announced his squad today for the Irish women’s second major ranking tournament of the summer. Cork Harlequins’ Cliodhna Sargent (pictured) comes in for attacking midfielder Niamh Small in the one change to the side that […]

News in brief: Rovers to Spain/Cuddy for Cookstown/A note on transfers

* Three Rock Rovers will travel to Barcelona in January 2010 to take part in the 62nd running of the prestigious Three Kings Tournament. The tournament attracts some of the world’s top club teams with previous winners making up a who’s who of European club hockey with Club de Campo, RC Polo, Uhlenhorst, Harvesthuder, Southgate, […] 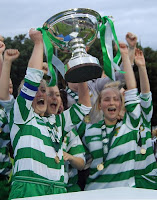 * Glenanne’s Mary Waldron (pictured in green and white) picked up the FAI women’s senior cup final for the second year running last Saturday evening at Richmond Park as her football club St Francis got the better of Liberties’ rivals St Catherine’s 1-0. Waldron scored the winner last November in the 2008 final but it […]

Alan Giles (right) is the major surprise inclusion in Paul Revington’s Irish squad for the EuroHockey Nations Trophy in Wrexham, which gets underway in nine day’s time. He comes in for exam-tied Andy McConnell while Peter Caruth is another set to make a ranking-tournament debut, taking the place of the injured Mikey Watt. Giles, 28, […] 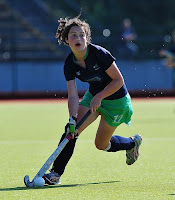 Ireland’s U-16 boys and girls tip off the highlight of their summer programme this afternoon in Largs, Scotland as they take on England, Scotland and Wales in a four nations tournament. With this being a non-European year at this age group, the tournament provides the setting for players to get used to the intense rigours […]

Stephen Butler marked his 150th cap today with trademark drag-flick against Belgium but the milestone game for the Glenanne man ultimately ended in defeat as Ireland fell to their second defeat in Waterloo in two days. Two very late goals from the Red Lions accounted for the Irish on Saturday in a lively opener. David […] 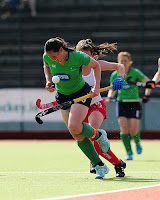 Ireland coach Gene Muller was left searching for a sharper cutting edge to his strike force after three losses in three days to Spain in Valencia this weekend. His side fell to back-to-back 4-0 defeats on Friday and Saturday before a much improved performance on Sunday saw the side lose 2-1 but felt his side […]

Phelie Maguire will be given a late chance to break back into the Irish team for the European championships as he was named as one of Paul Revington’s three changes from the Champion’s Challenge II side for a two-match series with Belgium – currently world number nine. Maguire has been out of hockey since relocating […]

Weston have pulled off one of the most eye-catching appointments of the summer as Alan Browne takes over the men’s first team coaching reins. Browne brings with him an incredible record from his 14 years as a senior player with Glenanne in which he won every honour in the domestic game during the Tallaght club’s […]

Irish vice-captain Ciara O’Brien has been forced to announce her retirement from international hockey due to injury after amassing 156 caps in the green shirt over the past nine years. O’Brien has suffered from a degenerative, arthritic condition in both knees over the past year and her decision has been based on medical advice. She […] 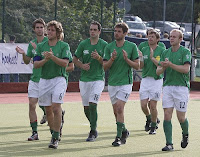 Poland 3 (Marcin Strykowski 2, Dariusz Rachwalski) Ireland 3 (Mikey Watt 2, John Jermyn); Poland win 5-4 on penaltiesIreland let the inaugural Champion’s Challenge II title slip through their fingers at Belfield this afternoon as they let a commanding lead and performance come unstuck in the closing stages of a pulsating final battle against Poland. […] 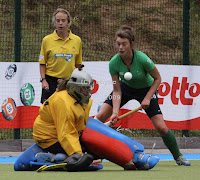 Ireland U-18 girls 3 (Chloe Watkins, Brenda Flannery, Katie Codyre) Russia 2Ireland’s U-18s survived relegation from the A division, scoring three minutes from time against Russia to end their EuroHockey Youth Championships in fifth place courtesy of their 3-2 win over Russia this morning. France’s 3-0 defeat of Lithuania meant only a win would see […]

Ireland U-18 Boys 1 (Stu Loughrey) Wales 0Andy Smyth’s side showed their steely determination for a second successive game as they struck late to beat Wales in an extremely tight-fought battle in Vienna. Stu Loughrey finished off fellow Leinster man Kyle Good’s brilliant cross with just four minutes to go of their semi-final for the […] 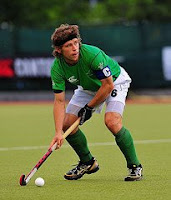 The announcement of the dates for the first round of the EuroHockey League (EHL) and the 2010 World Cup qualifying (WCQ) tournaments has led to concerns over men’s player availability for both club and country. Just one week separates the EHL’s round 1b from the first of three WCQ events with a very real possibility […]

Girl’s EuroHockey Youth ChampionshipsIreland U-18 Girls 1 (Chloe Watkins) France 0Ireland created a chance to qualify for the semi-finals as they got the better of France 1-0 in Nivelles, Belgium. They created plenty of opportunities including nine short corners and plenty of goalmouth action but their lone goal came courtesy of Chloe Watkins’ 12th minute […] 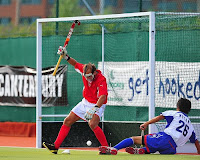 Group A: Japan 2 (Katsuyoshi Nagasawa, Kenji Kitazato) Poland 3 (Marcin Strykowski, Tomasz Gorny 2)Both of Ireland’s group A opponents felt their way slowly into the competition, sticking rigidly to a half-court press game which ultimately bore no fruit and little goal-mouth action. By contrast, the second half developed into a dramatic shoot-out from the […]

U-18 Europeans: Day one results