Corinthian guaranteed themselves top spot in women’s EYHL Division 2 Pool A with a 3-2 win over Trinity at Whitechurch Park, building a three-goal lead which they eventually held on to.

The reds started well and went in front from a quick counter-attack via Jodie Douglas and Milly Lynch which ended in Lauren McGrane scoring in the 12th minute. Number two came from Nicola Torrans when Camila Arbulo intercepted and passed to the teenager who calmly netted. 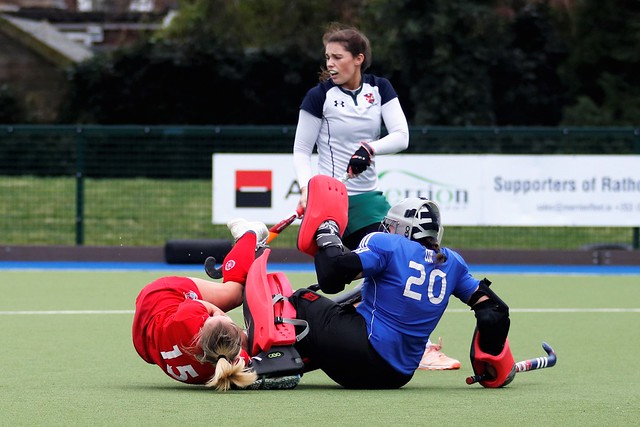 It remained that way through Q3 before Sara Quill extended the lead to 3-0 in the fourth phase. Ailish Long got one back with nine minutes to go against her former club and Isy Delamer netted a scrappy goal in the last minute, earning what might prove a vital bonus point for Trinity. It lifts them above Lurgan by a point with two games each remaining.

Cork C of I kept up a mathematical chance of advancing when they beat NUIG for a second time this term. It was 0-0 at half-time but second half goals from Ciara Sexton, Mel Ryan and Hannah-Kate Finn – all between the 48th and 59th minutes – earned a 3-0 result.

In Pool B, Zara Malseed was the weekend’s big scorer with five goals in Ards’ 12-0 tonking of Greenfields. It lifts them to 20 points and they ended the weekend two points clear of Monkstown who are on 18.

Despite the ongoing absence of the injured Chloe Watkins, Town got six points from the eight on offer this weekend, starting with a 2-1 win on Saturday against Queen’s.

Koren Ferguson put the Ulster side in front at half-time, just about as Seanna Murnaghan had to save a stroke just before the break for Queen’s.

It went level when Sophie Moore first-timed an equaliser in the third quarter and she then deflected in Amber Barnwell’s ball for the winner with 14 minutes to go in spite of concerted late Queen’s pressure.

A day later, Town fell behind again at half-time with Jenny Clein giving UCC the advantage from Caoimhe Perdue’s assist. But Town fought back and Moore was on hand again with her third goal in two days to make it 1-1.

It keeps the Dubliners in second place in the group while UCC are three points back; Queen’s stayed in the hunt with a 4-0 win over Greenfields. All sides have two games to play in this competition, starting next Saturday.

In Leinster Division One, Glenanne came back from a 2-1 deficit at three quarter time to beat North Kildare 3-2 with Clare Shillington scoring twice.

Leah Brennan’s third quarter goal earned Genesis a crucial 1-0 win over Naas to move up to seventh place on their own. Avoca made it 10 points from the last 12 as their late season run of form saw Hilary Lennon’s single goal account for Clontarf 1-0.