Glenanne picked up their first win since early October with a 3-2 success at St Andrew’s in a match preceded by a minute’s silence in honour of Ken Treacy, a stalwart of Pembroke’s golden generation of the 2000s.

Stephen Brownlow opened the scoring with a low drag-flick and it was 2-0 at half-time following a lovely interchange between Jonny McCormack and Brad Venter ended with the latter blasting a rising shot into the top right corner.

Another classy move down the right wing between McCormack, Gary Shaw and Brownlow ended with Stu Ronan flicking home amid the scattered Pembroke defence for 3-0 early in the second half.

Alan Sothern got one back with a brilliant first time backhand volley, keeping his eye on the ball after a few flailing sticks missed out on a bouncing ball. Sothern then added a drag-flick to cut the gap to 3-2 with 25 minutes still to play.

After that, it got scrappy with a series of cards shown but no further goals as Glenanne move three points above Pembroke who drop to ninth place.

YMCA’s stunning second half show saw them leap out of ninth place above Pembroke as Ross Henderson grabbed a double for the Ballinteer outfit. The first half was scoreless with the teams exchanging penalty corners but the goals started to flow in the second half with Henderson providing an immaculate finish for 1-0.

Posting up, he had the strength to win a 50-50 and hold off the tackle before rasping a backhand into the top corner.

Serious selection of goals here from @YMCAHC vs UCD from yesterday in the men's #EYHL; favourite is Eric Prehn doing one of his specialities to cap it off! pic.twitter.com/aTRxhufZwe

Eric Prehn then defied gravity to score his first of the season from close to the baseline for the fourth, the style of which he has gone viral with in the past.

That came amid a brilliant spell of three goals in the space of seven minutes, giving them plenty of breathing room for the last 10 minutes.

Monkstown came back from a goal down to beat Corinthian 5-1 at the ALD Merrion Fleet Arena, cutting Lisnagarvey’s lead at the top back to five points, albeit with a game extra played.

Calum Adair netted for the reds in the first minute when Peter Caruth took a quick free which the teenager controlled before hitting home into the backboard. Town were level in the ninth minute thanks to a Rory Nichols drag-flick.

And it was 2-1 before the end of the first quarter with some pretty impressive skills and touches from Davy Carson put him in position to lob the ball over Charlie Henderson. The second quarter remained scoreless before Town ran riot in the second half. Ross Quirke was fed by Karl Lynch whose quick pass was lifted over a stick by Geoff Cole and then hit into the backboard.

Andrew Fogarty made it 4-1 in the 51st minute with a lovely spin and turn in front of goal and the scoring was complete with five minutes left when Keith Kenning took the ball down impressively and passed to Gareth Watkins. A lovely run down the right ended with a pass to a diving Quirke who crossed for Carson to finish with a clever touch. 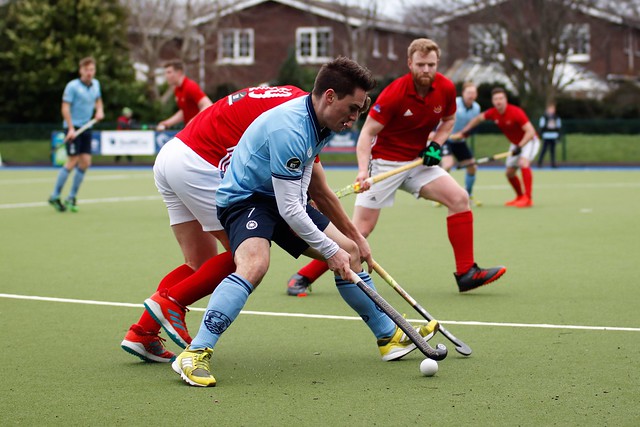 Two wildly contrasting halves of hockey ended up with a probably deserved share of the spoils with both sides leaving Grange Road with a few regrets.

Just days after announcing his international retirement, Bann’s Eugene Magee said his side need to find the happy medium between structure and throwing caution to the wind after a timid first half saw them on the back foot.

“It is about that balance; we perhaps lacked the latter in the first half but gained a bit in the second half and had our chances to win the game but it wasn’t be.”

“The second half we deviated from the game plan and paid the price. Banbridge are obviously a quality outfit so to go 2-0 up was a big positive but the draw is disappointing.”

Three Rock bossed the first half with Bann keeping out a couple of corners before James Kyriakides put the hosts on the board from a heavily deflected shot after Mitch Darling’s driving run spread the defence.

Darling then made it 2-0 with a solo second, taking a free quickly, going parallel to the circle before unleashing a backhand to the bottom corner.

Bann created next to nothing in that half but, with a much more aggressive press in the second half, they came to the party in a big way in the second half. Philip Brown slammed in a corner in the 39th minute from their first shot in earnest.

His chance to repeat the trick three minutes later was charged down brilliantly by Ben Walker, something which became a feature as the half went on with David Kane and Harry Morris also shutting out corners with the full face of their sticks.

The equaliser was not long in coming, though, as an overload down the right saw the ball worked into the centre to Peter Brown – who is enjoying life this term in the forward line – and he wriggled this way and that to evade Jody Hosking’s tackle and squeezed in a shot.

Bann were rampant and the third quarter time break was a relief for Rovers who steadied and they almost nicked in front when Walker deflected, first time, a long overhead just wide. Banbridge had a couple of corners but the defence was rigid and it stayed at 2-2.

Three Rock Rovers came from a goal down to beat UCD and develop a four point gap between the sides in the chase for EY Champions Trophy places. The students went in front thanks to a Guy Sarratt drag-flick in the 25th minute but the lead only lasted a short while as Ross Canning got a running deflection from an excellent cross by David Kane.

That left it at 1-1 at half-time while the third quarter was largely spent swapping cards. Mitch Darling then cracked home his second of the weekend from the top of the circle to make it 2-1 with five minutes to go.

UCD had a couple of corners to make a difference but Ben Walker’s running number one and Conor Quinn in goal combined to keep them out. Conor Empey impressed for the students in an effective attacking role but Jody Hosking and James Kyriakides were solid in defensive roles for Rovers. It was UCD’s third successive defeat as they struggle to regain the momentum from the first half of the season.