Monkstown won an excellent men’s EY Hockey league contest at Belfield to continue their run of form, moving within two points of leaders Lisnagarvey at the winter break. Both sides contributed to the contest with UCD coach Michael Styles frustrated his side could not get more from a tie in which they created plenty of chances.

Town started well and forced a corner within the first two minutes which Max Maguire made a good glove save above his head from a Rory Nichols flick. The students then started to really get into it and they scored from their first corner via Guy Sarratt, one of nine ex-Town men in the UCD side.

The visitors equalised with a corner of their own from Nichols and it remained that way at the break as Matteo Romoli’s bouncing shot was heading wide before hitting Nichols’ knee and flew into the net. It was originally awarded but then chalked off following a consultation.

Davy Carson got the final touch to the only goal of the second half, knocking it in after Jason Lynch’s cross got a great touch from Mark Gibbons. The ball bounced off the post, hit Maguire and then fell to Carson. Town held out for the last 10 minutes without Andrew Fogarty on a yellow card to land their fifth win of the campaign.

It was another fine defensive performance with Keith Kenning excelling at sweeper in place of the unavailable David Cole, making an incredible amount of tackles, while David Nolan was UCD’s driving force in the playmaker role.

“We have teenagers throwing themselves at balls just to touch them over sidelines in the last 10 minutes; the character is really strong in this team at the moment,” Town player-coach Gareth Watkins said of the win to Dublin City FM.

“We have belief we can score and cause trouble going forward so we have trained hard to back that up defensively. We did get off to a slow start but we are growing in confidence each game.”

“It just wasn’t our day,” UCD coach Michael Styles said. “We missed that little something in the last quarter. We held possession for 90% of it – performance-wise, it wasn’t what we were after.”

UCD complete their pre-Christmas schedule on December 14 against Annadale in a refix from last week.

Banbridge inflicted another big defeat on Annadale who slip to four points off the bottom while their Ulster rivals move up fourth place thanks to eight second half goals.

Eugene Magee gave the Havelock Park hosts a seventh minute lead but, despite a wealth of pressure, that was all they could garner in the first half. They soon cut loose in the second half with Owen Magee’s brilliant run and finish opening the floodgates. Jonny McKee reversed through the goalkeeper’s legs for the third and he grabbed his second in the 47th minute and got this second for 4-0  at three quarter time. 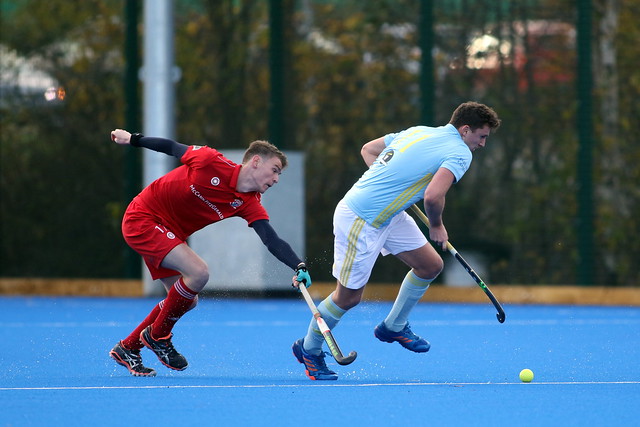 In the final quarter, Philip Brown turned in Eugene Magee’s ball at the back post, McKee completed his hat trick and Wright netted the seventh. McKee’s fourth and a sweet Dane Ward finish closed out a comprehensive win.

Three second half goals saw Three Rock Rovers recover to overhaul YMCA and move up to third in the standings. Ben Cullen, against his former club, gave YM the lead in the sixth minute when he applied a lovely lob over Shane O’Brien.

Mitch Darling levelled at 1-1 with a sliding deflection at the back post but YM restored their lead on the stroke of half-time from a Ben Campbell penalty corner drag-flick. James Walker continued his recent run of goals with a third in seven days when he made it 2-2.

Mark English then scored twice either side of the three-quarter time break, the latter a lovely team goal via Darling and Ross Canning for the striker to finish off at the back post.

Grant Glutz pulled one back with nine minutes to go from another corner drag and they had their moments in the closing stages when Rovers were reduced to 10 men but, crucially, they mistrapped a corner with two minutes left.

Leaders Lisnagarvey dropped points for the first time this season despite an incredible comeback from 4-0 down at St Andrew’s against Glenanne. For the Glens, it was a second 4-4 draw in three outings and leaves them in sixth place in the table.

Johnny McCormack and Adam Clayton gave the Glens a 2-0 lead at the end of the first quarter and the returning Clive Kennedy stretched the lead out to three. Stephen Brownlow had the hosts in dreamland with a penalty corner finish.

It put Garvey in unchartered waters this season but they had one back before half-time via Andy Williamson and a penalty corner from James Lorimer soon after the break helped build the momentum.

Williamson snagged his second with 16 minutes to go and Lorimer landed his brace to make it 4-4, ensuring a nervous final four minutes for the Glens to negotiate.

Corinthian 1 (I Stewart) Pembroke 1 (A Sothern)

Ian Stewart earned Corinthian their fourth draw from seven outings from a well-matched battle at Whitechurch Park, putting the reds in seventh place for the Christmas break with Pembroke remaining in ninth.

In a scoreless first half, the visitors had more of the ball, forcing Euan Mackay to make the first of a series of important saves between the Corinthian posts. The hosts existed primarily on the counter, hitting the post on a couple of occasions while Simon Thornton also impressed in the Pembroke goal.

Pembroke did take the lead in the second half after a couple of Nick Burns’ drag-flicks were charged down before Alan Sothern, at his second attempt, picked out the bottom corner on the stick side for 1-0.

Sothern had the chance to make it 2-0 from a penalty stroke but Mackay made a big save to keep Corinthian in the contest and the game started to go their way when Scott Sullivan was shown a ten-minute yellow card for a foul on the breaking Peter Caruth.

It allowed the hosts their most sustained period of pressure. Andy Colton charged down a few of their corners. Stewart had a goal initially awarded and then annulled when a sideline ball was deemed to have entered the circle directly from the free. The striker, though, got his goal in the 69th minute from a corner breakdown to earn their point.