With Christmas rapidly closing in, it is a huge weekend with the last round of the men’s EYHL and EYHL2 of 2019, the fifth round of the women’s EYHL as well as lots of Leinster league and Irish Junior Cup action on the agenda.

UCD against Monkstown is the big tie on the men’s schedule. The students’ game with Annadale last weekend was postponed due to a mumps outbreak with that fixture now pencilled in for December 14.

Monkstown, with Stephen Cole back directing things in midfield, have produced some lovely counter-attacking stuff this term with Davy Carson in great form. It has seen them rise to second in the table but they will have their work cut out.

Lisnagarvey will aim to complete a magnificent as they travel to Glenanne safe in the knowledge they will be the Christmas number one.

It has been a breath-taking show to date with 35 league goals while the stats are bolstered to 83 in just 11 games when the Irish Senior Cup and Kirk Cup are factored in.

They go to St Andrew’s as red-hot favourites against a side who have been a bit hit and miss this season and who missed the services of Shannon Boucher and Clive Kennedy in their defeat to Three Rock.

Three Rock face YMCA for a fourth time this season with the Grange Road hosts winning in three cup ties previously. The Y feature a half-dozen players who came up through the Rovers’ youth ranks with Sam Ryder likely to line out against his younger brother Ben for family bragging rights.

After a slow start to the season, Banbridge will be favourites against Annadale which could potentially see them into the top four by the end of Saturday’s play.

Ninth-placed Pembroke are another side looking to shake off the shackles but they meet a Corinthian outfit who have proven hard to beat.

EYHL Division 2 reaches the halfway stage, too, on Saturday. Cork C of I have the only perfect record and host currently winless Avoca at Garryduff; Inst and Railway are both on five points, making their meeting at Shaw’s Bridge in Pool A a vital one.

Pool B will be moving day – Cork Harlequins and Cookstown are both on six points and face off at Farmers’ Cross; Clontarf go to Kilkeel with the two chasers on three points from two games.

It leaves two games in Leinster Division One. Eighth plays seventh at Griffeen Valley Park where Weston host Dublin North while mid-table Portrane will be favourites when they go to ninth place Bray.

In midweek, Railway trailed three times against Rathgar but eventually won 4-3 to make it seven wins from seven. Andy Malcolm’s identikit corners made it 1-0 and 2-1 with Fergal Keaveney’s corner breakdown goal and a Daithi Medcalf finish tied it at half-time.

A couple of good Matt Breton saves kept it that way until the start of the fourth quarter when a Davíd Meade deflection at the back post from a Ben Epstein pass made it 3-2 to Gar.

The lead didn’t last long as Railway equalised five minutes later following a good counter attack, finished by Jeremy McKeever. And they struck the killer blow with four minutes remaining when Michael MacKenzie worked the ball to the back post for a David Sheil tap in.

On the women’s side, all the matches have the potential to be close-run things. 2018 Champions Trophy winners UCD host 2019 winners Pegasus in a potential humdinger.

Pegasus will be without Michelle Harvey who suffered an ankle ligament injury last weekend which has her foot in a protective boot, matching one her twin sister Kerry is also sporting at the moment.

Draw-masters Muckross and Cork Harlequins are both gunning for a first win of the season following three and two ties, respectively.

The Donnybrook hosts have seen a number of players move to the US for college hockey in the last few years but they have seen that flow reversed with the arrival of former William & Mary College’s Estelle Hughes.

Aisling Naughton’s pace gives them a great lead to work off while, Eanna Horan, Sinead Loughran and Leah McGuire give them bags of experience. Beth Barr was reported as a doubt for Belfast for this tie.

Old Alex are another side on nine points but could be overhauled by fourth placed Loreto; Railway Union and Catholic Institute are both on four points, making theirs an interesting proposition.

It makes for plenty of fascinating showdowns with plenty of scope for a shake-up in the standings.

In Leinster Division One, it has been another significant week. Monkstown came back from 2-1 down at half-time to beat Trinity 4-2 on Monday in a tie that was threatened at times by fog.

Kate Orr and Annie Lord were on the mark for the students but replies from Chloe Watkins, Sarah Greene – her first for Monkstown – Claire O’Reilly and a beautiful behind-the-back deflection from Sophie Moore.

On Wednesday, Trinity shared a 1-1 draw by Glenanne. Kate O’Connor’s penalty corner shot just about made it in for a Glens lead.

Amy Buttimer nicked the draw from a last second corner from a rebound which the Glens felt hit a foot in the initial phase of play but it stood.

North Kildare got their first point of the season with a 1-1 draw against Clontarf. Lucy Small put the Kilcock side in front in the opening 10 minutes before Becky McMullen equalised in the second quarter from a Ciara Byrne assist.

The results strengthened Corinthian’s lead at the top. They are five points clear with a game in hand on Trinity on 21 points while no other side has reached double figures to date. The reds face Clontarf at home on Saturday. 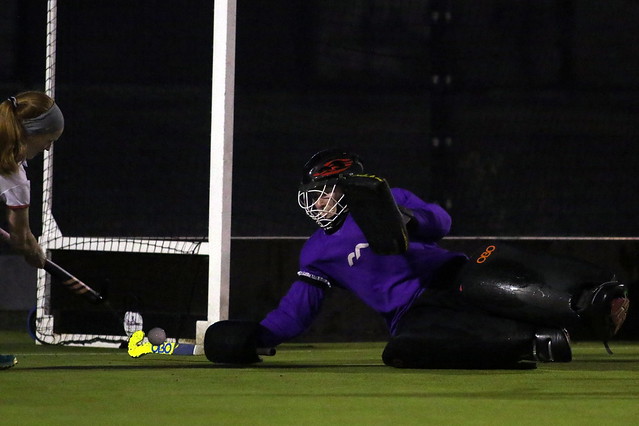