EYHL2 round-up
Trinity recorded a big win in Pool A of women’s EYHL2 to keep plenty of intrigue as the initial stage of the competition races to a conclusion over the next month.

They edged out Queen’s to inflict a first defeat on the Ulster side, coming from behind as the Ulster side edged in front via Rebecca Quinn in the first quarter. Trinity stepped things up after with Isy Delamer in great form and Ruby Keating and Clodagh Fullston buzzing further upfield.

Queen’s made much of the play in the third quarter with Jess McMaster wreaking havoc but it remained just a single goal. And Trinity showed it to be a vulnerable lead when they got level via an Ailish Long corner goal. 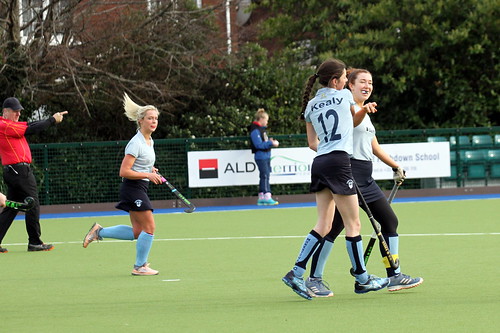 Long then provided a raking pass to Rachel Burns who slotted the second just three minutes later to turn the tie on its head. It leaves Queens on 19 points with Trinity on 14 with a game in hand.

UCC are a point back courtesy of a 1-0 win over Greenfields – Jenny Clein the scorer – while Corinthian are on 10 but have two games in hand. With four points for a win and losing bonus points on offer, it leaves plenty of scope for big changes this week.

Corinthian face Trinity in a refix on Wednesday evening before UCC host Trinity and Queens face the Reds on Saturday.

In Pool B, everything is much more clear-cut. Catholic Institute made it six wins from six with a handy 3-0 win over NUIG, Roisin Upton, Emer Ryan and Leah Clery getting the goals.

Monkstown confirmed they are semi-final bound, too, after a 3-1 win over Dungannon. Sadhbh Hoban-Logan scored twice in the first six minutes to set up the win, deflecting in first from a good move between Chloe Watkins and Rachel Moore before slotting in the second.

Karen Elliott got one back from a corner in the 26th minute after Jessica Hood’s first-up shot was parried by Laura McCarthy. Watkins, though, gave Town the breathing room they needed when she scored from the penalty spot seven minutes into the second half.

Insta host Monkstown in Limerick next Saturday in a tie that will more than likely confirm who tops the group.

In Leinster Division One, Corinthian moved within a point of first placed Trinity as they recorded a 7-2 win over Our Lady’s on the second last day of their provincial campaign.

The Terenure club took the lead early on via Karla Kennedy before Laura Motyer and Lauren McGrane reversed the scoreline at half-time, 2-1. Four goals in 15 second half minutes put them out of range and on course for a 14th win out of 17.

The reds close out their season with a date against Genesis on March 23 needing a win to have any chance of landing the title but at least two other results must go their way, too.

Naas got their fourth win of the season when Orla Brennan scored in the second half from Clara Chamberlayne’s assist for a 1-0 success against Genesis to sit in eighth place, a decent return in their debut season at this level.

Claire Byrne scored in the last minute to hand Avoca a 1-0 win, too, as they beat Rathgar. Glenanne affirmed their place in fourth with a 3-2 success against North Kildare.

Railway, UCD, Corinthian and Inst to contest EYHL2 final four as Tarf back up UCD win in Leinster
Pegasus score defining win over Loreto to leap-frog into first