St Raphaela’s won their first Leinster hockey title for 14 years as they got the better of Dundalk GS in the Senior 1B final at Grange Road.

Emma Roche netted twice while skipper Emma Pichot was also on the mark with all the goals coming in the second half of their 3-0 win. 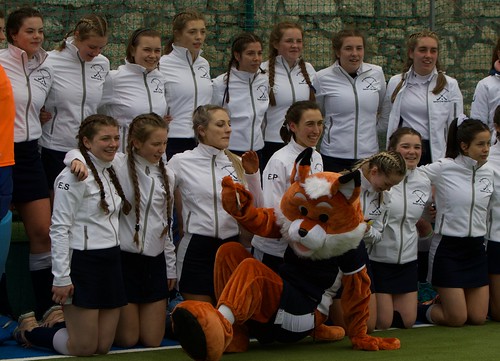 It was far closer than the final score suggested with the Stillorgan school’s Niamh O’Connor enjoying an excellent game between the posts.

At Junior 1B level, Caoimhe McCann scored twice as Balbriggan beat Bray in a battle between two Loreto schools. The Fingal side won 2-0 in an exceptional final performance.

It comes amid a hectic week with close to 20 finals on the agenda. High School – led by Irish Under-16 panelist Izzy Bowen – won the Junior Plate with a 3-1 final success on Monday over Our Lady’s Terenure.

Mount Anville won three trophies in the first week of the finals but they did not have the same luck on Monday. Twice, they missed out on glory via shoot-outs. In the Minor A league final, they were undone by Wesley College after a scoreless normal time.

It was the same outcome in the Junior 4s against Muckross Park after normal time had ended 1-1.

St Joseph of Cluny’s Louise Enderson was one of the stars of the week as her shoot-out goal went viral. They eventually won out 2-0 against Loreto St Stephen’s Green in the Minor 1 final.

This unbelievable goal by Louise has been viewed over 10,000 times online and has been admired by @IreWomenHockey stars @AnnaOF @roisinupton @Clowatkins 💙

Keep sharing everyone and well done Louise, you deserve all the recognition 😊

St Andrew’s won the Minor Plate ahead of Alexandra College 3-1. In the Junior 3 final, Donabate CC won out against Mount Anville with Ella Jinks getting the only goal with a super first half strike, 1-0.

Mount Anville won Junior 4 ahead of Muckross Park by a single goal. In Minor 3, St Conleth’s College won an historic first title as they won a shoot-out against Loreto Beaufort.

Elsewhere, the Mount Anville seniors overcame Wesley 3-2 in the semi-final of the Premier League in Rathdown. Wesley went ahead in the first half but Mount Anville came back in the second half with goals from Aoife Hamilton and Natasha Twomey to win the game.