Men’s EY Hockey League – week 13 round-up
Three Rock Rovers 3 (A Empey, L Madeley, R Canning) Glenanne 1 (J Saeys)
Three Rock Rovers made it three wins in the men’s EYHL in eight days to see them close in on the top four as Ross Canning’s spectacular 64th minute goal won the day. He took in an overhead from Daragh Walsh on the run and then hammered through Iain Walker’s defences, inflicting a first defeat of the season on the Glens.

In a cracking tie in front of a good crowd at Grange Road, Glenanne went closest in the first quarter when Eddie O’Malley’s corner touch hit the post. Rovers stepped up their game in the second and took the lead from a quick counter as Harry Morris picked out Ali Empey alone in the D and he lifted a perfect shot over Walker.

On 31 minutes, Luke Madeley picked out the top corner from Rovers’ only corner – reduced to four defenders due to a line-break – for 2-0 at half-time. The Glens had a couple of big chances before half-time with Jamie Carr keeping Rovers two clear and he then saved a Joe Brennan stroke just after half-time.

The goalkeeper also produced a remarkable treble save off the line as Rovers rode out a rocky period. Former Belgian Under-21 international Jerome Saeys did get one on the board from a fifth corner to half the gap with 22 minutes to go.

Rovers, though, were creating lots of chances with Iain Walker and profligate finishing stopping them from going clear before Canning’s wonder strike. There was time for Carr to tip over at full stretch from Shannon Boucher to keep a healthy gap between the sides.

Cookstown found a way past him with one minute left in the half, a slick move at the short corner saw Jack Haycock deflect home for 1-0. Annadale started the better of the two teams in the second period but it was Cookstown who extended their lead. A penalty corner broke down but Greg Allen kept his head, driving the ball back into the danger area for Ryan Millar to deflect over the line.

The Carryduff men came back into the game with Matthew Rollins having to be on his toes to stop a well-worked shot from Callum Robson. Dale did get a goal when Ben Wallace was allowed to force his way through a maze of tackles to steer the ball past Josh McCabe for 2-1.

Annadale had Ryan Getty and Tom Robson yellowed either side of the third and fourth quarter but did manage to get level. Adam McAllister looked to have a wall of red players between him and the goal but a mixture of excellent skills and loose tackling allowed him to get into a position to scoop the ball over the line from the right baseline.

Moore made another great stop from Michael Kerr at the set piece with Cookstown putting on all sorts of pressure in the final quarter, but Dale were able to see out the game despite late yellow cards for Andrew O’Hare and the Reds’ Ryan Millar.

Peter Brown had given Bann the early advantage from play but Gareth Watkins fired home a low penalty stroke in the 14th minute, won by Sarratt’s drag hitting a foot on the line.

Ryan Spencer’s reverse from the top left corner of the circle went in the bottom right for 2-1 midway through the second quarter only for Eugene Magee’s drag-flick to tie things up at half-time. 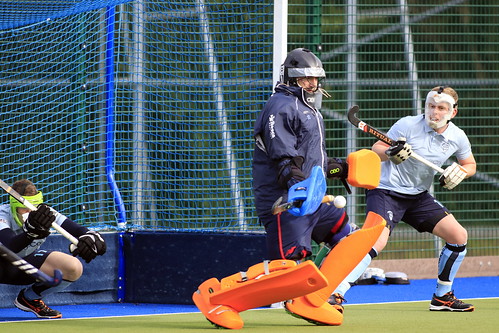 Sarratt restored the Town lead early in the second half from a reset penalty corner following an initial shot coming off Philip Brown’s foot. Parity was restored for a third time by Jonny McKee when he tapped in from an attack down the baseline.

The returning David Fitzgerald then made an impression wth a couple of good saves from Alexander Tinney before a series of Town corners ended with Sarratt ripping one top left and they held firm for a fifth win of the season.

Cork C of I 1 (J Jermyn) Pembroke 2 (H Spain 2)
Harry Spain’s pair of corner goals means Cork C of I’s wait for an EYHL win continues as they fell 2-1 to Pembroke at Garryduff in a closely contested battle.

The first of Spain’s goals came in the 15th minute after an exchange of early corners saw Pembroke succeed with their effort for a 1-0 lead. Simon Thornton had to be alert to keep it that way when Stephen Parker’s reverse fell to John Jermyn who drew a good save.

Richard Lynch’s slap was deflected over Phil Byrne while a Thomas Chamuleau drag-flick was hooked over as play went from end-to-end. Jermyn did equalise in the 45th minute down the right channel.

Pembroke went straight back up the pitch and won a stroke – with Alec Moffett receiving a yellow for his troubles – but Billy Lynch saved from former team mate Stephen Sweetnam.

But the critical blow came with 17 minutes left when Spain beat Lynch’s dive to the top corner from another drag-flick for 2-1. The final quarter was defined by a number of cards for both teams but Pembroke held on for an important win to stay ahead of Three Rock in the Champions Trophy places.

Lisnagarvey 2 (M Nelson, T Chambers) YMCA 2 (T Ritchie, B Campbell)
Lisnagarvey salavaged what may yet prove an important point but YMCA will be by far the happier as they continued their strong recent form, making it seven points from the last 12 to enliven their chances of avoiding relegation.

The Y had to roll with the punches in the first quarter as Garvey made most of the play with Jakim Bernsden impressing. YM hit the front in the second quarter with Thom Ritchie finishing off a quick counter-attack move but the Comber Road hosts got level quickly via Andy Williamson’s pass to Matthew Nelson to finish.

Ben Campbell put YM in front for a second time in the 44th minute from a corner and they stayed 2-1 ahead when Bernsden made his second penalty stroke save – from James Corry – in three games.

Troy Chambers equalised with 14 minutes left as YM had to hold out with 10 men three times with Grant Glutz (green), Ritchie and Campbell (both yellow) spent time in the bin but got their precious point.