The Glens went in front from a corner which Cedric Jakobi dragged in amid a flurry of penalty corners in the second quarter and it remained 1-0 until the half-time break. Rae got Bann level when he finished off after a baseline run and he then converted a penalty stroke – twice as he was asked to retake it – to make it 2-1 at three quarter-time

Glenanne fought back this time and got the next two goals with David Keogh’s crash ball finding a sliding touch from Shannon Boucher to make it 2-2. Jakobi then made it 3-2 after good work from Brad Venter won a penalty corner.

But Banbridge summoned up another stroke when the ball hit Stephen Brownlow’s body on the line for a second time and Rae once again found the target for 3-3.

Lisnagarvey 8 (M Nelson 2, O Kidd 2, B Nelson, T Chambers, A Williamson, J Lorimer) Cork C of I 2 (D Lynch, S Parker)
Lisnagarvey moved top of the table as they dismissed bottom side Cork C of I 8-2 at Comber Road, continuing their excellent run in 2019. Matthew Nelson opened the scoring in the 12th minute from Ollie Kidd’s assist before James Lorimer made it 2-0 with a drag-flick at the end of the first quarter.

Nelson’s second made it three with a high reverse into the roof of the net before his younger brother Ben got in on the act with a chip at the back post. Kidd got the fifth early in the second half and Andy Williamson brought up the half dozen from a switch move. Troy Chambers and Kidd completed their scoring before the end of the third quarter.

C of I did rally in the last quarter with David Lynch and a Stephen Parker stroke getting them on the board but Garvey were already well out of reach.

They led 4-0 at half-time with Daragh Walsh’s reverse-stick rebound opening the scoring in the fifth minute. Mitch Darling juggled in another from Jody Hosking’s pull back and Harry Morris got a pair before half-time, first off slamming in a rebound and then working a ball through the goalkeeper from the baseline. Ben Walker also had one disallowed as Rovers were in control.

Mark English for the fifth early in the second half from Ben Walker’s run and cross before Dale saved two efforts off the line in brilliant fashion through Ryan Burgess. From there, the visitors – driven on by Callum Robson – did get a foothold in the game with Chris Thompson scrambling home a chance off the post.

Burgess whipped in a drag-flick at the end of the third quarter and Robson’s crash ball got a touch from Paddy Crookshanks to reduce the deficit to 5-3 with 11 minutes remaining. Rovers replied, though, with English slipping the last defender and sweeping in the sixth goal which killed off any comeback hopes.

Monkstown 7 (G Sarratt 2, G Watkins 2, S Byrne, R Spencer, D Carson) YMCA 1 (R Henderson)
Monkstown ran up a comfortable 7-1 win over YMCA to back up their excellent win over Banbridge a week ago. They swept into a 5-0 half-time lead and were well clear before Ross Henderson got one back for the Y.

Guy Sarratt continued his strong goalscoring form with two more drag-flicks, the first of which opened the scoring. Davy Carson got the second two minutes later when set through one-on-one.

Gareth Watkins got a third in a similar fashion and Town added two more in the last four minutes of the half – a Watkins reverse and Sarratt’s second drag.

The third quarter was a steadier affair and YM did get one back in the final quarter via Ross Henderson but Town finished strong with Ryan Spencer scoring his second in a week. The seventh came off the back of a Dave Fitzgerald corner save which was booted clear to halfway where a three-on-one was executed, Carson slapping to Sam Byrne to finish. 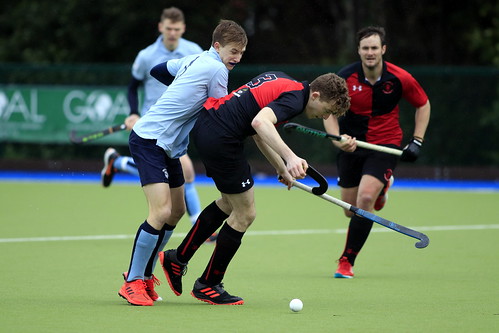