It was a 15th win from their last 16 in the league with just a blip on the opening day of the season against second placed Cork Harlequins, their only loss in two regular league seasons.

“We will enjoy this but we have one more league game next week and want to finish strong and then take that on to the EY Champions Trophy finals,” UCD captain Deirdre Duke said afterwards to Dublin City FM’s Declan Hughes.

The UCD side that won the EY Hockey League on Saturday

“We are pretty proud of our record but it does bother us that we have that one loss [in the last two seasons] but that has driven us on and is testament to ho hungry we are for success. That loss at the beginning of the season spurred us on to where we are to today.”

They did so despite the absence of coach Miles Warren who remained in Dublin following the birth of his second child earlier in the week. Nonetheless, any of his nerves would have been eased in the early Twitter updates. It took less than eight minutes for Katie Mullan to put UCD in front and six minutes later, Sara Twomey produced a great effort from the top of the circle for 2-0.

Abbie Russell made it three off the back of good build-up play by Mullan before the end of the first quarter. Katherine Egan stretched the lead further to 4-0 before Chloe Brown pulled one back from a corner.

It was not the start of a remarkable comeback, however, with Emma Russell sending the ball in to her younger sister Abbie to convert for 5-1. Lena Tice shot straight down the middle for number six and Mullan produced a typically powerful shot from the top for a magnificent seven.

Trinity 0 Hermes-Monkstown 3 (R Carrigan, C Quinlan, R Moore)
Hermes-Monkstown reignited their hopes of avoiding the automatic drop as they won for the second time this season against Trinity – the only side they have beaten in this league campaign.

They were by far the more efficient team in front of goal while the experienced Christine Quinlan bossed the defensive lines. It puts them within a point of the students with one game to go. If they can stun UCD – already confirmed as champions – next time out, they might in position to pull off a great escape.

After a lively Trinity start, Hermes-Monkstown took the lead on the quarter hour when Rosie Carrigan batted home the second phase of a penalty corner. The game became end to end after that with Rachel Burns’ reverse drawing the best from Liz Murphy while Carolyn Crampton kept out Natalie Esteves.

Into the second half, Quinlan was hoovering up everything at the back and she also launched the move to win a corner which led to her making it 2-0. Moments later, Rachel Moore powered in the third goal and the damage for Trinity was done.

Belfast Harlequins 1 (R Johnston) Pegasus 1 (R Murdock)
Pegasus got the point they needed to rubber-stamp their ticket to the EY Champions Trophy playoffs where they will meet Cork Harlequins.

For Belfast Harlequins, it keeps a mathematical chance of reaching the playoffs but they would require a remarkable turnaround in goal difference fortunes to get them there.

The Deramore Park hosts had the first corner chance in an end-to-end opening quarter while Lizzie Colvin and Henna Watt buzzed around. Becky Gamble was blocked by Sammy-Jo Greer to keep the scoreline blank in the first quarter. Marianne Fox was the more active keeper in the second period with multiple good saves, keeping out Alex Speers just before the big break, 0-0.

Plenty more corners came in the third quarter with plenty of goalmouth action before Rachael Murdock (nee McMillan) finally broke the deadlock just before the third rest period. Rachel Johnston, however, replied in kind from a corner won by Watt, setting up a lively closing phase but good defending from Fox and Gemma Frazer ensured the draw.

Railway Union 0 Pembroke Wanderers 0
The battle for fourth place and the relegation playoff spot will go right down to the wire after Railway Union’s 0-0 draw with Pembroke in the Dublin 4 derby.

Pembroke were the better team in the first quarter, winning two corners with Railway defending them well. The Park Avenue hosts came more into the game in the second quarter two corners of their own and a couple of shots on goal.

Michelle Carey and Emma Smyth fired narrowly wide in the second half while Gillian Pinder had a quick break down the middle from Pembroke’s most fluid move but the all-important goal proved elusive.

Railway continued to push for a goal in the final quarter but the final pass did not connect, leaving the sides to settle for a share of the spoils. The result leaves Railway three points clear of Loreto in fifth but the Beaufort side have a game in hand. At the bottom, Pembroke stay in eighth place, two clear of Trinity and three ahead of Hermes-Monkstown but with a much stronger goal difference.

Quins – who were without Naomi Carroll – went 1-0 up six minutes in through Michelle Barry before Sarah Clarke thumped in a corner, continuing her good form for Loreto. Alex O’Grady restored the Quins lead 19 minutes in but Niamh Small had the game back level at 2-2 by half-time.

Two minutes into the second half, Ali Meeke put the Beaufort side in front for the first time but Barry’s second of the day put the game back in the balance at 3-3 with over half an hour still to play.

During that phase, Hamill got the only goal to put Loreto within range of catching Railway in fourth place, three points behind but with a game in hand going into the final weekend of the campaign. 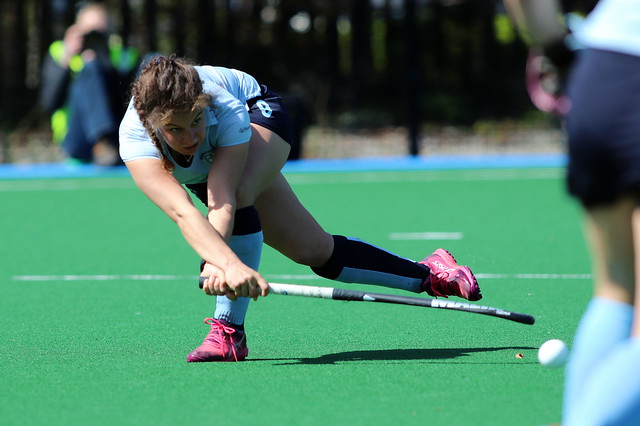 Sunday: Cork Harlequins 1 (C Sargent) Trinity 1 (N Sweeney)
Trinity got what could prove an important point in their bid to avoid the drop as they got a point at Farmer’s Cross. It means a draw for Hermes-Monkstown against UCD next weekend would no longer give them a chance of overhauling the students with only a win good enough.

It could have been even better for Trinity as they took the lead via Niamh Sweeney in the 39th minute from play but Cliodhna Sargent scored a corner with 11 minutes to go to make it honours even. Both sides were shy key players with Trinity working off a panel of 13 on the day with Erika Markey and Ellie Noone not able to play while Roisin Upton and Naomi Carroll were out for Quins.