Pembroke raced into an early two goal lead against Lisnagarvey with Stephen Sweetnam and Ronan Flannery – firmly on the comeback trail after a very long spell of injuries – getting goals in the opening 10 minutes. 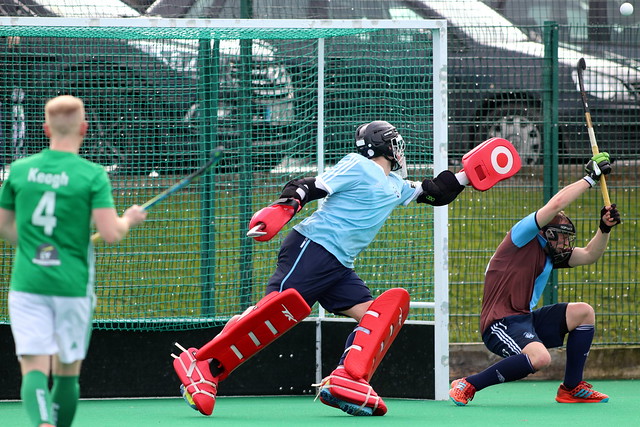 Garvey held plenty of possession after that but Pembroke made the game safe in the second half when Alan Sothern slotted home a stroke in the 39th minute.

Three Rock, meanwhile, ended Glenanne’s unbeaten run on the national stage with a 5-1 away win at St Andrew’s. Rovers were strong in the first half and built a 2-0 lead thanks to Mitch Darling’s pair of goals with two classy finishes.

They held a similar lead in their first league meeting before succumbing to a big comeback and there was potential for something similar when Eddie O’Malley was credited with the goal when his cross for Neil Byrne took a defensive touch into the goal.

But Rovers went back two goals ahead four minutes later from a Luke Madeley corner. Glenanne had a series of corners to get back into the game but came unstuck with two more Rovers goals in the last five minutes from Ross Canning and John Mullins.

In the women’s semis, goals were less plentiful with Kate Gourley’s first senior goal for Pegasus the only one across the two games. It earned Pegs victory in their derby against Belfast Harlequins but it could have been more but for the excellent goalkeeping of Helen Stevenson.

UCD were taken all the way by Loreto but kept their title retention bid in tact as they won a shoot-out 3-2 after a scoreless 70 minutes. It was a feisty encounter with plenty of cards.

In the shoot-out, it was all square going into the fifth round where Deirdre Duke held her nerve to score while Loreto missed, giving UCD a 3-2 success and a final berth.

On finals day, UCD and Pegasus will be in action from 1pm while the men’s final is on at 3.45pm. In between, there will be a ParaHockey blitz between Monkstown, Railway Union and Three Rock. Both senior finals can be streamed live via the Youtube links below.

Elsewhere, Banbridge and Monkstown were both run reasonably close by the bottom two sides in back matches in the men’s EY Hockey League.

Guy Sarratt’s double was the central part of Monkstown’s 3-2 win over Cookstown as they came back from an early Scott McCabe goal to record the win.

Andrew Ward quickly replied with an eighth minute screamer on the reverse and Sarratt added two corner drags before half-time for a 3-1 lead. Stu Smyth responded in kind with a corner of his own with a few minutes left but Monkstown took the spoils and move back into the top four.

Bann beat Railway Union 2-1 with Jonny McKee scoring a corner variation and then finish off a glorious move via Bruce McCandless and Owen Magee inside the first quarter.

Kenny Carroll got one back from a corner with four minutes left but Bann held on for the win that keeps them just in the hunt for a top four place.

As such, both Monkstown and Banbridge will be hoping for a Three Rock win in the cup final. Should Pembroke win, they would guarantee an EY Champions Trophy place, meaning Bann and Town would be virtually out of the race for the other three tickets.