It was a low-key game, shy on chances as Railway made things difficult for the table-toppers to get rolling. The first shot on target came 20 minutes in from Railway, moments before the Glens got the only goal. It came via lovely interplay from Gary Shaw and O’Donoghue, the former’s reverse dink leading to the latter finishing one-handed.

A couple of Glenanne corners were well defended, keeping the gap at the minimum. Into the second half, three Railway corners drew a couple of saves from Iain Walker before the Glens started running up set pieces of their own which Stephen O’Keeffe kept out.

Glenanne had half chances for further goals snuffed out with Kenny Carroll and Jeremy McKeever doing well to shut them out while O’Keeffe blocked a corner on the final whistle, meaning the Glens had yet another single goal victory.

It was 2-2 after just 15 minutes as Peter Blakeney and Eugene Magee exchanged corner goals before Conor Empey and Josh Moffett netted from play in quick time. Blakeney’s second made it 3-2 before the end of the first quarter and the game was won in the second period when Richard Pautz and Luke Madeley’s drag made it 5-2 at half-time.

The second half was tighter-knit with Magee giving Bann an outside chance of a comeback but Empey replied within a minute for a 6-3 lead which they held for the last 19 minutes.

Pembroke 2 (A Sothern, T Hill) Annadale 1 (C Roberts)
Pembroke moved back into the top four with a 2-1 win over Annadale at Serpentine Avenue. Tim Hill finished off a good team move and Alan Sothern posted up, spun the defender and fired home for the second. Connor Roberts got the Dale goal with nine minutes to go, a result which gives the Ulster side little chance of reaching the top four places.

Cork C of I 1 (J Dale) Monkstown 1 (G Sarratt)
Cork C of I and Monkstown drew, the result edging the Garryduff side ever closer to confirmed safety while Town lost a place in the division by the end of the weekend’s play.

Simon Wolfe had the best of the first quarter chances but saw his reverse well saved by Gordon Clarke – standing in for David Fitzgerald between the posts – before Town had two major chances in the second quarter via Jason Lynch and Andrew Ward.

The second half had more bite with the game being played in the Monkstown half and C of I went in front via Julian Dale’s drag into the goal from a near impossible angle from the left baseline. He almost repeated the trick but hit the side-netting.

Monkstown fought back, won a couple of corners and scored from the second of them through Guy Sarratt with five minutes to go.

Cookstown 1 (T Sloan) Lisnagarvey 3 (M Nelson 3)
Matthew Nelson’s hat trick keeps Lisnagarvey’s feint chances of winning the EYHL regular season title alive as they beat Cookstown 3-1 at Steelweld Park. They remained 10 points off leaders Glenanne on Saturday night but had two games in hand and a meeting with the Glens on April 14 to try and put the pressure on further.

Nelson scored the only goal of the first half in the 22nd minute while Josh McCabe made a couple of great saves to limit the damage. Nelson followed up with a trianing ground corner goal three minutes into the second half. The points were secure when he completed his treble soon after before Timmy Sloan reduced the gap in the last 10 minutes.

Sunday: Lisnagarvey 3 (M Robson, P Gleghorne, S Murray) Pembroke 3 (A Sothern, N Burns, K O’Hare)
Lisnagarvey fought back from 3-1 down but a 3-3 draw ultimately meant lost ground in their bid to catch Glenanne at the head of the table. With Alan Sothern, Nick Burns and Keith O’Hare all on the mark in the first half, Pembroke spun out to a 3-1 lead only for Sean Murray to score a screamer and reduce the gap to 3-2 at the big break.

Paul Gleghorne levelled from a corner and his side went close to nicking the win from another set piece that saw two back post sliders combine to chip the ball wide. Pembroke won a corner on the final whistle but it, too, went incomplete and a draw ensued.

As always, Iain Walker played his part, saving a penalty stroke as Monkstown gave them more than a run for their money. Andrew Ward’s opening goal was cancelled out by a Gavin Gibney goal for 1-1 at half-time. O’Donoghue and Davy Carson exchanged quickfire goals to set up another tense finish.

But in such circumstances, there only ever appears to be one winner and the Glens duly provided the last gasp drama when Richie Shaw intercepted a hit out and was bundled over. The setup was perfect and Boucher applied the winning shot. Their reward is a semi-final date with Three Rock Rovers on April 7. 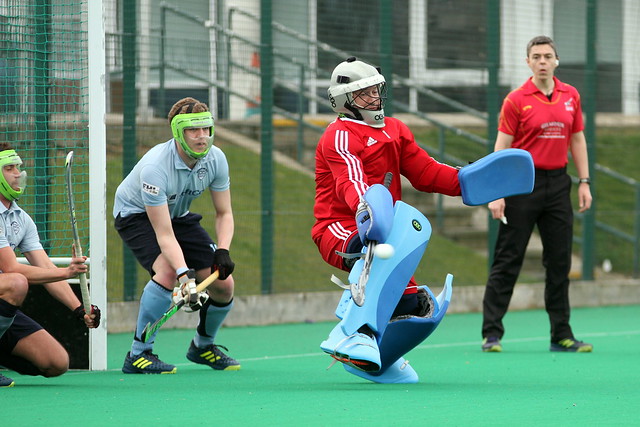