Naomi Carroll had a shot taken off line inside 50 seconds by Orla Patton as Quins looked to get off to a flying start but they were soon absorbing a lot of pressure with Emma Buckley making key saves. Quins had the ball in the net from a corner from Cliodhna Sargent but the first shot was deemed dangerous, going just over the backboard.

UCD replied in kind with Sorcha Clarke winning a corner which led to a Katie Mullan shot which was initially well saved by Buckley but Emma Russell snapped up the rebound.

Quins had three corners, including one on the stroke of half-time, but UCD defended well to stay one up. Rebecca Barry picked up a yellow card for a foul on Sara Twomey; she had just returned from the suspension when UCD went two up following a spell of sustained pressure with Deirdre Duke’s reverse-stick shot finding the bottom right corner after a through ball.

Into the final quarter, the Cork side won three further penalty corners with Naomi Carroll causing havoc. Both teams enjoyed spells of dominance with Lena Tice the stand-out defender for UCD while Caoimhe Perdue was a constant menace for the hosts.

Quins coach Stephen Dale flagged his side’s lack of match practice as a potentially key factor ahead of the game and it looked to cost his team dear in their first competitive game of 2018.

“We were rusty and you could see we hadn’t had a match in a while,” he said. “UCD were by the far the sharper. We had a good start but it would have been an injustice if they didn’t win; they were the better team.”

It was Quins’ first loss of the campaign and give UCD the first bit of daylight in the title chase. Dale, though, says the race is far from over.

“We will play better than that, no doubt. Anybody can take points off anyone in this league but UCD are not very much the team to catch.”

UCD skipper Deirdre Duke, by contrast, was thrilled with the points: “It’s huge to come down here and take the points,” she said afterwards. “It’s absolutely not an easy place to come and they are a super side who are getting better and better.

“We neutralised their threats really well. We defend from the front. The forwards worked tirelessly to turn ball over in the press, something we take huge pride in it. We are very quick on the counter and with distributors like Lena [Tice] in our team, you just have to be in the right place.”

Railway Union 0 Loreto 0
In a fast-paced match, two excellent defences reigned supreme with Hannah Matthews controlling play for Loreto at the back and Orla Fox and Holly Jenkinson keeping the Railway defence intact.

The first quarter was mainly played between the 23 metre lines with play moving from end to end. The crowd saw the silky skills of Nicci Daly back in Loreto colours but she was unable to penetrate the Railway defence, being well marshalled by Kate Orr. Grace O’Flanagan was forced to make one save from a Loreto incursion, whilst at the other end Railway had a couple of shots but they were high and wide.

The second quarter followed a similar pattern with few chances for either side. A nice attacking interchange down the left-hand side between Kate McKenna and Kate Lloyd ran out of steam at the circle while at the other end a deflected ball fell to Ali Meeke in the Railway circle but her shot flashed wide.

Loreto forced the pace in the third quarter, winning the first corner of the game in the 36th minute but Grace O’Flanagan made the save which hit a Loreto foot for a free out. With a high press, Loreto were rewarded with a second corner which was cleared by Holly Jenkinson, the first runner.

The last quarter was a more even affair but again chances were few and far between. Railway created more chances with Katie Fearon making a strong run through the centre but failed to find a way past the strong Loreto defence. 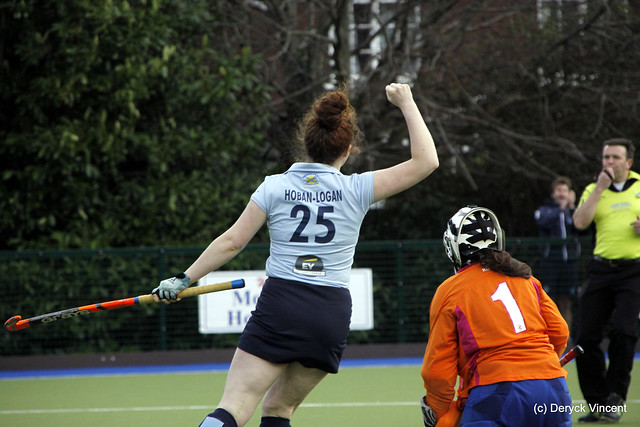 Zara Delany broke down the right but again Loreto prevented a circle entry. At the other end, Hannah McDermott was channeled wide when she had a chance in the Railway circle and Grace O’Flanagan was called into action in the last few minutes but kept her goal intact. Honours even as both sides compete for a coveted top four finish.

Hermes-Monkstown 2 (A Beatty, S Hoban-Logan) Belfast Harlequins 2 (Z Wilson, A Edwards)
Hermes-Monkstown built on their first win of the EYHL campaign, obtained in their last outing which took place before Christmas, as they drew 2-2 with Belfast Harlequins at the Merrion Fleet Arena. Ava Beatty tapped in at the back post to give the hosts an early advantage but Zoe Wilson crashed home a penalty corner at the end of the first quarter for 1-1.

Abi Edwards put the Belfast side in front in the second quarter as chances flowed at each end, the half ending 2-1 in the visitors’ favour. Sadhbh Hoban-Logan levelled the game with the only goal of the second half when she dodged left around the goalkeeper and slipped home on her backhand. Plenty of cards followed in the closing quarter but no further goals means Hermes-Monkstown remain in 10th but close the gap to Trinity. Belfast Harlequins remain in seventh place.

Trinity 2 (E Noone, S Campbell) Pegasus 6 (A Speers 2, L McKee, R McMillan, R Maguire, T Doherty)
Pegasus notched their sixth win of the campaign to keep them very much in the title race while also putting six points between them and fourth place Railway in the automatic EY Champions Trophy positions. Pegs went in front from close range from a corner, finished by Rachael McMillan in the 12th minute. They won a stroke soon after which Carolyn Crampton saved brilliantly from Michelle Harvey.

The second goal did come in the second quarter when Lucy McKee was located with a through ball and she applied a beautiful shot into the top left of the goal. Trinity got one back when nice attacking play from Erika Markey created the chance for Ellie Noone to score with a tidy reverse.

Pegasus restored their two-goal lead six minutes into the second half when Alex Speers was free on the penalty spot and she pushed into an open goal. Two minutes later, Speers was on the mark from another corner for a 4-1 lead. Ruth Maguire rebounded for the fifth with eight minutes to go and Taite Doherty closed out their scoring with a few minutes left. Sally Campbell scored a corner for Trinity with the last act of the game.

Pembroke Wanderers 1 (G Pinder) Ards 1 (A Benson)
Pembroke and Ards shared the spoils in their opening EYHL game of 2018, a result that keeps them in eighth and fifth place, respectively, on Saturday evening. The Ulster side showed their danger straightaway, drawing a superb save from Iseult Cambay while a corner chance went off the post.

For Pembroke, Orla Macken had a golden chance but fresh-aired at the top of the circle. Alice Ward hit the post in the second quarter from a corner while Jilly Ringwood also went close as the hosts upped their tempo but it remained scoreless into the break.

Into the third quarter, it remained scoreless with Ards taking their moments to go on the offensive with Chloe Brown forcing the issue. Maebh Horan’s super flat-stick tackle blocked the best of her chances. They went in front a minute into the final quarter when Amy Benson swept home from a ball in from the right for a precious lead.

But Pembroke were back on terms with eight minutes to go from a corner which Gillian Pinder struck home. It led to a helter-skelter closing phase but no further goals meant honours even.

Siofra O’Brien edged Loreto in front with a nice slip under the goalkeeper before Rachel Johnston scored a corner to level things up at half-time. Hannah Matthews restored the Loreto advantage with a penalty stroke before Watt got her side back to 2-2 early in the final quarter.

Zoe Wilson then put Quins up for the first time at 3-2 only for Nicci Daly to snap up a corner rebound, equalising yet again with five minutes to go. But Watt found a winner once more in the dying minutes to secure an important win that ignites the Belfast club’s playoff chances.