Men’s EY Hockey League
Glenanne 5 (G Shaw, R Couse, S Boucher, S O’Donoghue, N Byrne) Three Rock Rovers 2 (M Darling, L Madeley)
Glenanne produced an amazing final flurry of three goals in four minutes to snatch a crucial 5-2 victory in the title race against second placed Three Rock Rovers. It means they have won 10 points this season with goals in the closing five minutes of games, a key factor in their rise to the top and they now look in superb shape to win their first national title since 2010.

Early on, Three Rock made much of the running with a series of early chances with Mitch Darling at the heart of a series of attacks. Mitch Darling put them ahead when he smashed one off the crossbar which bounced back to him and he banged in the rebound.

Against the run of play, the Glens found an equaliser from a corner from a one-two move which fell to Gary Shaw to slap in. Into the second quarter, Glenanne had more of the play and won a couple of corners and they went ahead after a wave of counter-attacks. Richie Shaw slotted the ball to David Keogh who made up 50 yards; he drew the keeper and slipped to Richard Couse to slap home.

Luke Madeley equalised early in the second half from a corner and Rovers looked the more likely for parts of the second half to score next as goalkeeper Iain Walker made some brilliant saves. While he kept out those chances, Glenanne summoned a big late push and they went ahead when Shannon Boucher spun 360 degrees and shot in with a dragged shot.

Neil Byrne’s reverse made the game safe with two minutes left as Rovers went down to nine players. Shane O’Donoghue scored a stroke soon after for 5-2. It moves Glenanne seven points clear of Rovers with all of the bottom five still remaining in their last seven league games.

Monkstown 2 (S Cole, G Cole) Railway Union 0
Monkstown moved up two places in the table, taking advantage of Lisnagarvey and Pembroke’s cancelled match, to go into third place with Stephen and Geoff Cole scoring the goals. Town were also boosted by Gareth Watkins’ return for his first appearance of the season after injury. 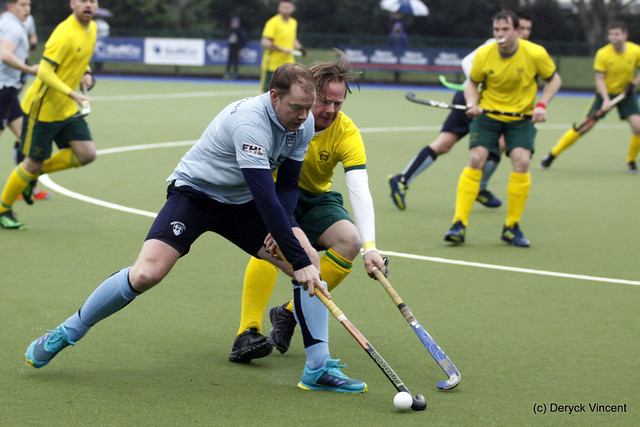 He showed his attacking intent in the first half before the sky blues went in front on the half hour with straight shot from Stephen Cole from a penalty corner. They made the vast majority of the play but cuold not kill the game off until five minutes from the end when Stephen Cole’s overhead found Andrew Ward down the left wing. He controlled and found Geoff Cole at the top of the D; he had plenty of time to lash home a great team goal.

Annadale 2 (R Carr, F Gibson) Banbridge 3 (Peter Brown, Philip Brown, J Wright)
Banbridge picked up their first win since mid-October as they came from a goal down to beat Ulster rivals Annadale, moving them up to seventh place in the process, reacting well after several weeks off. It was their first game to beat the frost in several weeks but they were boosted by the availability of Eugene Magee and Jonny McKee in tandem for a rare occasion this term.

Dale started the brighter but only had a Fergus Gibson goal to show for their efforts. But Magee turned the game after half time with some super work. Philip Brown’s drag-flick from a first Bann corner made it 1-1 before McKee’s cross was touched in by Peter Brown to swap the lead.

Jamie Wright got the third from close range with 12 minutes to go before Rhiley Carr gave Dale a lifeline four minutes later from a corner but Bann held on in a frantic finish for a 3-2 win.

“We are pleased with the result due to lack of preparation and match practice,” Bann coach Mark Tumilty said afterwards. “Delighted to have all players back from injury and hopefully we can progress up the table. We were down at half-time, Annadale played very well in the first half while we were well off the pace. I was happy with the second half performance.”

Banbridge will play Cookstown in a back match for the two sides at 8pm in Havelock Park.