Jean McDonnell whipped a cross across the circle which banged off the post but there was no-one there for the rebound. Kate Lloyd put in a reverse cross but it was deflected wide for the long corner. The hosts won a corner at the end of the quarter and was awarded another one for a Pegasus infringement but the ball was not stopped.

Pegasus were dominant in the second quarter with Lucy McKee drawing a save from Riona Norton soon after the restart. The same player scored the only goal in the 23rd minute when she scored on her reverse following a period of Pegasus pressure.

Taite Doherty had a chance to add another when she was put through on a one-on-one with the keeper but Norton was quick off her line to avert the danger. At the other end, Michelle Carey beat a number of players to get to the circle but her final pass failed to find a Railway stick.

In the second half, Railway went in search of the equaliser while Pegasus doggedly defended their lead in a feisty midfield battle, especially between Emma Smyth and Shirley McCay.

Railway failed to find a way through and, in the fourth quarter, took off their keeper in an effort to get the equaliser. Pegasus took advantage of the defensive deficit and won two corners but were unable to capitalise while Railway also had further corners but could not find the elusive goal.

Roisin Upton got the only goal of the first half when her shot from the top of the D was half-blocked, looping the ball up and over the stranded Naomi McKnight. The result was quickly killed off in the second half with three goals in a three minute spell with Naomi Carroll bookending the run.

She got on the end of a lovely flowing move for 2-0 in the 43rd minute; Oliva Roycroft added the third before Carroll extended the lead further. After a spell of three corners, Chloe Brown got one back with four minutes to go but Harlequins finished on a high with a couple of their own corners with Yvonne O’Byrne on the mark.

Belfast Harlequins 3 (Z Wilson, J Watt, J McAuley) Loreto 3 (H Matthews 3)
Hannah Matthews scored a second half hat trick to inspire Loreto to a dramatic comeback from 3-0 down to earn a share of the spoils against Belfast Harlequins. The tie was quickly relocated from a frosty Deramore Park to Grosvenor Grammar School to make sure the tie got the go-ahead.

After a lively start with chances at both ends, Quins went ahead when Robyn Chambers won a corner which Zoe Wilson dragged home for 1-0. Jenna Watt extended the lead a minute into the second half from a fine individual effort and a deflection goal from Jenny McAuley seemed to have primed them for all three points.

But two Matthews’ strokes – the latter vehemently contested by the hosts for a perceived back-stick in the build-up – got Loreto right back into the game. And they kept pushing, winning a corner in the final minute which fell to Matthews on the rebound to slam home.

Sunday: UCD 7 (D Duke 2, S Clarke, K Mullan, S Young, F McDermott, A Richardson) Trinity 1 (E Noone)
UCD were in irresistible form at times in the second half to beat Dublin student rivals Trinity and return to the head of the women’s EYHL table. They got off to the perfect start with a very early goal created by Deirdre Duke and Katie Mullan’s slip pass, allowing Sorcha Clarke to finish off on her backhand for 1-0.

UCD had much of the play after that but were almost caught a couple of times by Sally Campbell while had other chances been controlled better, the hosts could have been in trouble. Abbie Russell had to depart the scene early following a collision with Carolyn Crampton, adding to injury issues for UCD who were without Ellen Curran (ankle ligament injury) joining Sarah Robinson and Sara Twomey on the sidelines. 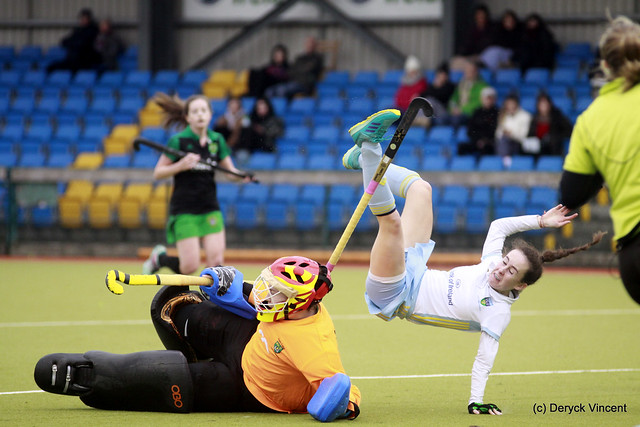 The second half was a different story with UCD scoring at will with Duke, Mullan and Bethany Barr in breathtaking form. Mullan’s cheeky pass found Duke unmarked to slam in the second goal. Mullan rocketed in the next moments later and Freya McDermott made it 4-0, picking up the pieces from a corner rebound.

Ellie Noone scrambled in one for Trinity and her gentle lift over Clodagh Cassin required a covering Emma Young to save off the line. But UCD finished strong with Mullan locating a Duke touch for 5-1. Sarah Young hit home her first goal of the season and Anna Richardson volleyed in a Duke shot for the seventh.

Irish Senior Cup, second round: Pegasus 6 (R McMillan 2, M Harvey, S McCay, T Doherty, K McKee) Genesis 0
Pegasus advanced to the third round of the Irish Senior Cup with a 6-0 win over Genesis, eventually pulling clear of a game Leinster Division One side for whom Sorcha Cunningham was once again superb.

Rachael McMillan scored the only goal of the first half before they pulled away in the second half with Michelle Harvey making it two, Shirley McCay snagging a corner goal before McMillan’s second and further efforts from Katie McKee and Taite Doherty completed the win.