Women’s EYHL – day eight round-up
Saturday: Loreto 1 (S Torrans) Cork Harlequins 3 (R Upton, M Barry, N Carroll)
Two final quarter goals put free-scoring Cork Harlequins in the frame for their fifth win of the season with a 3-1 win at a tie quickly switched to St Andrew’s due to a frozen pitch at Beaufort, keeping up their chase of leaders UCD.

Sarah Torrans put Loreto – who had Nicci Daly in their squad – 1-0 up six minutes before half-time when she drifted to the right and around Emma Buckley to slot home.

But the lead was brief with Roisin Upton scoring a low drag-flick, ensuring parity at half-time. It remained that way until 15 minutes from time from play via Michelle Barry and Naomi Carroll secured all three points three minutes later.

Both came from sweeping moves down the right wing with Yvonne O’Bryne delivering the final ball. Barry’s was an excellent near post touch for 2-1 while Rebecca Barry did the hold up work before spinning the ball to O’Byrne whose quick pass was tapped in by Carroll.

Monkstown 2 (C Quinlan, C McGilp) Trinity 1 (J Long)
Monkstown ground out their first win of the women’s EY Hockey League campaign, tightening things up at the bottom of the table ahead of another big game on Sunday when they face Pembroke.

Christine Quinlan’s deflected shot from a penalty corner handed them their first goal since the opening day of the campaign after six blanks. They were also bouyed by the arrival of South African Under-21 Natalie Esteves who almost prompted a second with a great ball to Caitriona McGilp who shot just wide.

Liz Murphy kept them narrowly in front with some great saves before Jenny Long got it back to 1-1 with 20 minutes to go from a well-worked corner, setting up a tense final phase of the game.

But McGilp settled the game when she buried a corner with 11 minutes left, a vital win that reduces the gap to ninth place Pembroke ahead of their key Sunday showdown. Trinity are also back in range, two points above them.

Pembroke 2 (A Ward, O Macken) Railway Union 3 (H de Burgh Whyte, J McDonnell, K Lloyd)
Railway Union moved into the top four in the women’s EY Hockey League for the first time his season as Kate Lloyd scored with 10 minutes to go to win the Dublin 4 derby. Pembroke had the services of Emily Beatty and Gillian Pinder, giving them an extra impetus and they went ahead in the 15th minute.

Beatty created it when her shot came off goalkeeper Riona Norton and Alice Ward finished the second phase nicely. Hannah de Burgh Whyte equalised 10 minutes later when she got the final shot off from a corner to make it 1-1.

Jean McDonnell put Railway in front seven minutes after half-time but Pembroke were not going away easily and they were level when former Railway player Orla Macken with an excellent strike from a corner.

Lloyd finished off a Railway corner move, though, to win it soon after in spite of a concerted late Pembroke charge.

UCD 1 (A Russell) Ards 0
Abbie Russell’s 12th minute goal retained UCD’s slim lead at the top of the women’s EY Hockey League with a 1-0 win over Ards at Belfield. The students welcomed back Ellen Curran after injury but were without Sarah Robinson and Sara Twomey.

Nonetheless, they got off to a great start as Russell pounced following a good build-up from Bethany Barr and a good umpire’s advantage to allow the chance. UCD had the best of the play for the most part with Katie Mullan instrumental in driving them forward while Chloe Brown was key for Ards when they countered late in the half.

Naomi McKnight was in fine form in the Ards, making some great stops as Deirdre Duke and Mullan peppered the Ards goal as time wore on but just the single goal stood between the teams at the final whistle.

Sunday: Pembroke 1 (A Naughton) Hermes-Monkstown 0
Aisling Naughton scored against her former club to give Pembroke a big boost, lifting them out of the relegation playoff place and into eighth place, leaving Hermes-Monkstown bottom over the Christmas break. 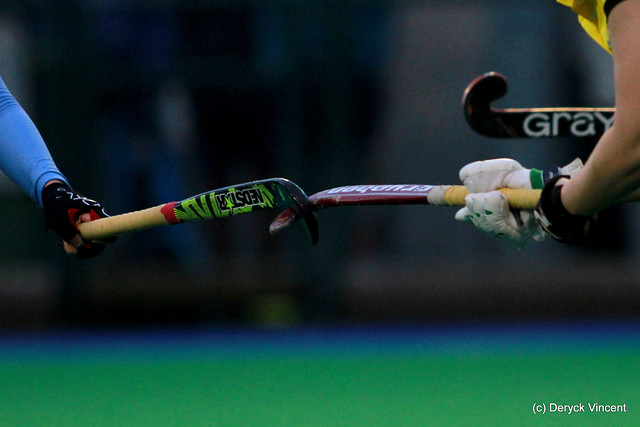 They made the best of the early exchanges with Erika Hinkson seeing a corner move deflected wide before Naughton got on the end of Gillian Pinder’s shot with a lovely finish for the only goal.

Pembroke carried that lead into half-time and went close to another when Hinkson intercepted between the two centre halves but Liz Murphy kept out her strike. Hermes-Monkstown awoke to draw Iseult Cambay into a couple of saves but Pembroke remained the more attacking force for much of the tie and grasped the three points.

Old Alex won the only game to be played in women’s Leinster Division One as Fiona Bradish scored twice and Sylvia O’Mahoney continued her excellent scoring form in a 3-0 win over North Kildare.

It extended their lead to four points in the table, albeit with a game extra played, which looks set to ensure they will be the number one side at Christmas. The other three games on the agenda fell foul of the weather.

In the Irish Hockey Trophy, too, only a quarter of the games went ahead. Munster clubs prevailed in the two that did get the go-ahead with Cork C of I scoring three times in the first half of their tie against Galway en route to a 3-0 win.

Catholic Institute won the only game of any description to be played in snow-bound as they availed of Rainey’s full-sized indoor pitch at the Meadowbank Arena in Magherafelt. Christine O’Shea scored the only goal of the game with a brilliant corner deflection 11 minutes from time.