The hosts got off to a brilliant start with Jenny McAuley making it 1-0 in the sixth minute and Lizzie Colvin added a second in the 16th minute, the latter a fine corner strike.

Cork fought back with Upton scoring her first of the day from a 20th minute corner and Caoimhe Perdue levelled the tie on half-time. A Zoe Wilson penalty stroke restored the Belfast lead soon after the break but Cork kept plugging away, winning a couple of corners, eventually leading to the equaliser at the end.

Monkstown 0 Ards 1 (F Kidd)
Faye Kidd’s fourth minute goal proved the sole difference between Ards and Monkstown to give the Ulster side a perfect six from six – with two clean sheets – over the weekend to move into fourth place.

The early goal came at the start of a very even match with Monkstown producing some fine phases of play but they were unable to break through the Ards defence. It means they remain in wait of their first points of the season while the Londonderry Park club continue their positive start to the campaign.

Pembroke 2 (J Ringwood, O Macken) Pegasus 3 (K McKee, H Grieve, A Speers)
Pegasus fought back from a 2-1 deficit to beat Pembroke and move into a share of third place as Alex Speers struck the winner at Serpentine Avene. After a scoreless first quarter, Katie McKee and Jilly Ringwood exchanged goals in the second quarter to go in at the big break at 1-1.

Orla Macken put Pembroke in front early in the second half only for Hannah Grieve to equalise within four minutes. Speers then scored a lovely goal to grab the lead and, in the end, a third win from six games to date.

Railway Union 2 (O Fox, S Canning) Trinity 2 (N Sweeney, S Campbell)
Railway fought back twice against Trinity to keep their unbeaten record going in the women’s EY Hockey League with their fourth draw out of six games. Sally Campbell gave Trinity the lead for the first time with a spectacular shot into the top right corner in the 23rd minute. Orla Fox equalised from a corner three minutes later for 1-1, a rebound after a couple of Carolyn Crampton saves.

Niamh Sweeney restored the Trinity lead a minute into the second half when she fired home when located in the circle by Erica Markey. Once again, Railway came back and won a stroke in the 43rd minute which Sarah Canning converted, making it 2-2 with 27 minutes to go. Plenty of chances came and went for both teams but they had to settle for a share of the points. 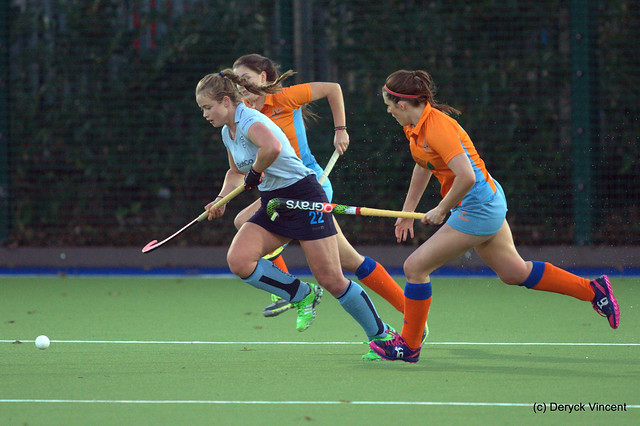 UCD 3 (L Tice, K Mullan, D Duke) Loreto 1 (S Torrans)
UCD returned to the summit thanks to a superb second half performance, completing a six-point weekend to lead the way by a single point from Cork Harlequins with three points covering the top five.

Played in glorious sunshine, Loreto had the edge in terms of general play in the first half while UCD finished strongly but no breakthrough came. Two minutes into the second half, Lena Tice did the requisite from a corner. Katie Mullan – switching between midfield and the forward line – came alive during this spell, causing untold problems.

Sorcha Clarke won a corner which Mullan finished for 2-0 in the 53rd minute and the game was put to bed in fabulous fashion when Mullan placed a controlled pass into the path of Deirdre Duke who struck brilliantly. Sarah Torrans got one back in the final minute for Loreto but the result was gone at this stage.