Boucher’s mid-circle finish completed the Glens’ second comeback from 2-0 down this season to keep their lead at the top of the rankings. Bann, meanwhile, suffered five green cards and two yellows in the last five minutes to finish the game with nine players. 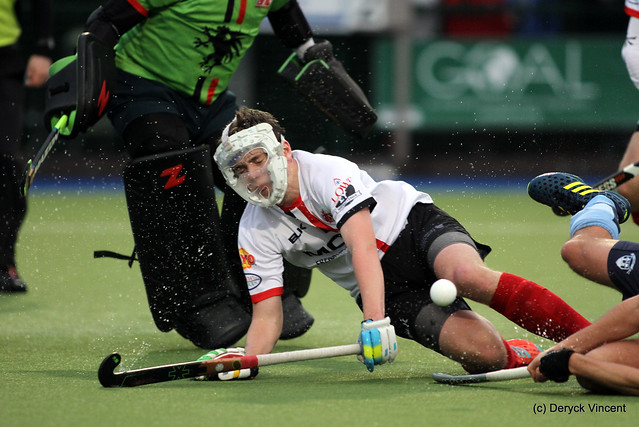 Fraser Mills put Bann in front 10 minutes in when he snapped up a rebound created by Neil Gilmore’s shot. Zach McClelland and Bruce McCandless went close to second goals before Mark Barlow scored his first senior goal in the 29th minute with another rebound for 2-0.

Boucher pulled one back before half-time from close range to put the game back in the mix and they started the second half with a couple of corners that Bann did well to charge down. Gareth Lennox made a superb double save to keep out another to keep it at 2-1 going into the final quarter but a stroke a minute into the last stanza got Glenanne on terms, Shane O’Donoghue scoring.

Two more Glens corners were denied while Bann had a couple of great chances to go back in front, the biggest one from an Alexander Tinney break. Jamie Wright and Mills, though, both were shown yellow in the last four minutes with Boucher scoring the winner.

Cork C of I 2 (J Jermyn 2) Pembroke Wanderers 2 (A Sothern, H Spain)
Honours even from a penalty corner battle at Garryduff as John Jermyn twice put Cork C of I in front only for Harry Spain and Alan Sothern to tie things up. All the goals came in the second half of a well-matched game that leaves C of I in sixth place and Pembroke in fourth.

Set pieces always looked the most likely route to decide the tie with Billy Lynch saving two Pembroke corners in the first quarter. C of I had two of their own in the second quarter, one not trapped, the second well saved by Mark Ingram to leave it scoreless at half-time.

Jermyn slotted his first high into the roof of the net in the 39th minute for 1-0 but a switch move three minutes later made it 1-1 with Spain scoring for Pembroke. The Dubliners went down to nine players when Kirk Shimmins (green) and Nick Burns (yellow) went off for a spell.

Pembroke survived that short-handed spell but Julian Dale won yet another corner – drawing a card for Richard Sweetnam – which Jermyn dispatched just before the end of the third quarter. Again, the lead was short-lived with Sothern levelling at 2-2 in the 55th minute.

Richard Lynch became the third former C of I man to see the sin-bin for Pembroke with a yellow five minutes from time. It gave the Cork side a chance at grabbing the spoils in the closing stages with Dale winning another corner but Ingram saved to secure a point from an exciting tie.

Pembroke win a corner against Cork C of I. Pic: Graham Catchpole (click for more images)

The Carryduff side showed their hunger for the battle with two early circle incursions leading to corners which David Fitzgerald repelled. Aaron Bailey, in reply, made two brilliant runs that brought former Town keeper Nick Holman into play, saving at the feet of Shane Nolan.

Annadale went in front in the 18th minute when Peter Caruth – against his former club – made a superb run that ended up with Fitzgerald saving. Caruth recovered the ball and slapped to the back post where former Kilkeel man David Tremlett was on hand to tap in.

They held that lead into the big break courtesy of a Holman save from a Guy Sarratt drag-flick. The lead was extended to 2-0 13 minutes into the second half following a slightly fractious start to the second half in which David Cole got a green and then a yellow card, the latter leading to a corner which Rhiley Carr flicked into the bottom right corner.

From there, Dale frustrated Monkstown who piled forward, winning a couple of corners, one of which was saved off the line but could not break through.

Peter Caruth had a fine game before a late injury and yellow card. Pic: Deryck Vincent

The game ended with a major flashpoint when Caruth – who was sensational throughout – pulling up with a hamstring injury. After a time spent receiving treatment, he flung his stick at the fencing on the stand side in frustration, leading to a yellow card

The club later confirmed it was a low grade hamstring tear that will keep Caruth out of Ireland’s trip to the Netherlands this week.

Railway Union 0 Lisnagarvey 2 (M Nelson, . Corry)
Lisnagarvey got back on the winning trail after last week’s draw with Cookstown as two second half goals dispatched Railway Union who have scored in just one of their seven EYHL games this season.

The first half was predominantly controlled by Garvey, seeing one corner chance taken off the line by Kenny Carroll. Matthew Nelson’s screamer broke the deadlock four minutes into the second half and James Corry extended the margin to two in the 52nd minute from play to complete the win. Garvey remain second going into their date with leaders Glenanne next Saturday at St Andrew’s.

Cookstown, too, were without key men with Keith Black, Andy Barbour and long-term injury victim Paul Thompson out with Stewart Wylie making his senior team debut.

Mitch Darling started the scoring in the 21st minute before Conor Empey added the second six minutes before half-time. A Darling deflection made it three in the third quarter and Ben McCrea scored his first for Rovers since his return from UCD, getting on the end of a good counter-attacking move. Stu Smyth pulled one back from a corner with eight minutes to go for scant consolation for the Co Tyrone club.