Old Alex quickly got back on the winning trail on Monday evening in women’s Leinster Division One, running up a 4-1 success against Muckross in their refixed tie.

The initial fixture saw Alex lead 1-0 until the lights went out prematurely on Marlborough Road. This time, Sarah Scott was happy with the opening phases for Muckross but was left frustrated as Alex countered to break the deadlock from a long corner with Lisa Jacob getting on the end of things.

“I was really happy with our opening 20 minutes; we had lots of chances and their keeper played very well,” Scott said afterwards. 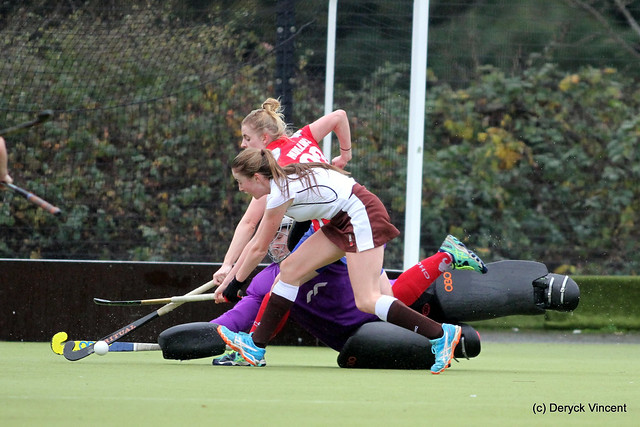 Alex cut loose after that, Rebecca Evans slammed home after half-time before Rachel Gray thumped in a corner hit. Sylvia O’Mahoney scored a corner rebound for 4-0 before Sophie Barnwell got one back late in the game.

Alex’s Fiona Bradish was delighted with what is a key victory: “We are absolutely delighted; it was a really tough and even match. We really started to play well in the second half and stretched them.”

It came two days after their first defeat of the season on Saturday at the hands of leaders Corinthian.

“It’s really nice to come back today after Saturday and get this win. To give Corinthians their due, they took their chances when they came and we didn’t and so they deserved it. It’s a really competitive league and there will be plenty of fights along the way.”

For Scott, she said: “It’s a big learning curve; 80% of them are teenagers. Emma Mathews has transferred back over to us from UCD who will be a huge addition to the team. So we are just focused on Corinthian this weekend where we have a huge job to do. This is a very open league and an exciting one.”

Corinthian lead the way thanks to that win over Alex, Jessica and Lauren McGrane netting the goals in the 2-0 win. It puts them a point clear of Alex and Muckross, the latter having beaten Genesis 3-0 on Saturday.

Elsewhere, Clontarf landed their first point in Division One since their promotion after 12 years away from the top flight in the province, tying 2-2 with Avoca.

The first 10 minutes started well for Clontarf but they found themselves 1-0 down through a quick break from the Avoca defence with Sarah Healy on the mark.

Alannah Rothwell got the equaliser to make it 1-1 at half-time, her first goal for the first team. Avoca once again got back in front 10 minutes into the second half courtesy of Lauren Treacy.

Tarf, though, earned their point from the penalty spot when a corner shot hit a foot on the line; Sadbh Quinn converted the stroke.

North Kildare and Our Lady’s shared a 1-1 draw in Kilcock. Terenure put the pressure on in the last 15 minutes of the first half and got their goal when Aoife Kelly pounced on a loose ball from a corner.

The tempo of the second half was better from both teams and North Kildare were pushing for the equaliser. They had one disallowed but got their leveller from a straight corner shot from Megan Shakson. Her side also hit the post in the closing minutes.

Clontarf got their first point of the season against Avoca. Pic: Deryck Vincent

Glenanne shook off their frustrations of five successive single goal losses to beat Rathgar 5-1 and get off the mark for the season. Serena Rush dragged in an early corner and they went on to lead 3-0 at half-time as Rachel O’Brien reacted quickest to a rebound and Hannah Morrin got on the end of a Hannah Delaney assist.

Delaney extended the lead to four in the second half before Susan McRann got one back from a corner. Delaney closed out the result with a swivel and pull into the bottom corner on her reverse.