Luke Madeley’s third minute penalty corner put Rovers 1-0 up before Railway levelled through Kieran Springett from a set piece in the eighth minute. Thereafter, the hosts took control. Peter Blakeney netted his first of the season – in his second league game since returning from injury – with a volley from close range from a corner to retake the lead. 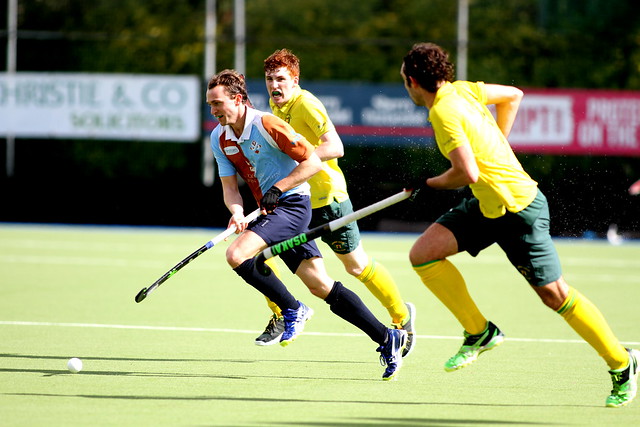 Ross Canning nailed a stroke for 3-1 in the 23rd minute after Jody Hosking was fouled. Hosking fired home a reverse for the fourth moments later. Mitch Darling scored a classy fifth for a 5-1 just before the break.

The third quarter saw numerous chances with James Walker hitting the post at one end while Richard Forrest clipped the outside of the goal at the other. Stephen O’Keeffe made a series of good saves, one with his faceguard, to minimise further damage.

Hosking hit the bar once more early in the fourth quarter. English did get one back with four minutes to go when he lobbed Jamie Carr after he latched onto a 70 metre pass out of defence. Madeley, though, finished the game as it started with a late corner goal for the 6-2 result.

They took the lead via Shane O’Donoghue who ripped home a great shot following a nice move down the left side. UCD replied instantly as fellow Irish international Jeremy Duncan tapped in at the back post for 1-1 at the end of the first quarter.

It stayed that way into the second half with O’Donoghue going closest before the break to netting again. The game opened up significantly on the restart with Enda Tucker winning a corner that was well saved by Conor Quinn before Stephen Brownlow hit wide.

Duncan went close at the opposite end while Adam Clayton and Gary Shaw had a double-chance denied to keep it locked at 1-1 going into the final quarter.

There, it all went wrong for UCD as Sam O’Connor got to the baseline and somehow slid home a shot on his reverse for 2-1. Neil Byrne then beat a few defenders before hammering home a cracking third.

Chances flowed quick and fast and the fourth goal arrived when UCD had withdrawn their goalkeeper and conceded a sixth corner of the tie. With no one in pads, O’Donoghue fired into the roof of the net.

And the students were stung once again when Richard Couse robbed the ball and found Stu Ronan on his own in the circle to tap in the final goal.

Instonians 1 (W Robinson) Cork C of I 2 (S Wolfe 2)
Simon Wolfe scored twice in the closing five minutes to deny Instonians a second win of the campaign and now lie on the brink of automatic relegation.

The result moves C of I back into the top four ahead of Monkstown, albeit with two games extra played. Play was end to end in the opening phases with the visitors earning a stroke in the 10th minute but Philip Smith shot wide.

Inst replied with a couple of corners but could not force home a goal-mouth scramble. They did go in front in the second quarter, though, as James Corry came to the fore. William Robinson netted a penalty corner drag-flick for the opening goal.

At the far end, Peter Bingham in the Inst goal was having a fine game so Inst went in 1-0 up at half time. It remained that way through the third quarter as the hosts seemed happy to hold the 1-0 lead and to try to keep Cork at bay for the remainder of the game.

This plan worked until the last four minutes when CI pressure brought an equaliser. With Inst playing deep, a driven ball into the circle saw Wolfe get a stick to it for 1-1. Wolfe then pounced again two minutes later to complete the comeback and snatch all the points.