They beat YMCA 2-1 in the crucial Sunday morning tie at the Merrion Fleet Arena thanks to Calum Robson’s later winner before closing out this part of the campaign with a 2-0 win over Clontarf.

It means they join Bandon, Corinthian and Cookstown in the playoffs in a couple of weeks’ time with the winner of the four-team showdown going straight up and the second placed side playing either UCD or Railway Union in a playoff for the final spot for the 2017/18 season.

YM had started the weekend in flying form, racing into a 5-0 half-time lead against Clontarf, ending 7-1 thanks to two goals each from South African duo Andrew Buckley and Grant Glutz.

They found their second tie much tougher, edging past the challenge of Belfast Harlequins as Andrew Jones and Luke McClelland exchanged goals before another of the Y’s South African crew, Nick Berichon, produced a moment of brilliance to win the tie 2-1.

Dale, meanwhile, blitzed Belfast Quins 4-0 before beating Cork Harlequins 6-0 with Peter Caruth on the mark four times between the ties.

It left the two sides as the main contenders for the ticket, setting up their Sunday battle. Ollie Brown grabbed the lead for Dale from turnover ball and passed it around Iain Walker for the only goal of the first half.

Glutz equalised with a drag-flick for 1-1 but Robson popped up with the winner in the latter stages for the victory.

It meant Annadale needed a draw in their final game against Clontarf and they got there with second half goals from Caruth and Chris Heath to record a 2-0 win.

YMCA finished second with a 5-0 win over Cork Harlequins with Clontarf ending second thanks to their win over Cork and a draw against the Belfast Quins on Saturday afternoon. 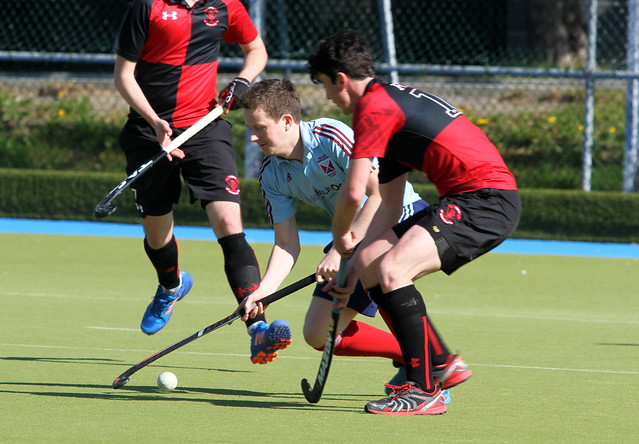