Men’s EY Hockey League
Monkstown 1 (D Carson) Banbridge 5 (E Magee 2, M Bell, J McKee, D Ward)
Banbridge made a major statement of intent as they thumped long time rivals Monkstown 5-1 at the Merrion Fleet Arena, further demonstrating why they are the fancied side for silverware at this stage of the season.

Eugene Magee – who has been deployed in a more advanced role in recent weeks – started the scoring in the 24th minute from a corner before adding a second from play in the last minute of the half for a 2-0 lead. Matthew Bell extended the advantage early in the second half from the penalty spot before Davy Carson got Town back in the mix with a diving finish on the backhand.

But final quarter goals from Jonny McKee and Dane Ward saw Bann pull further clear as they coasted through the last 10 minutes. The win pushes them two points clear of the chasers while Monkstown now have serious work to do to earn a playoff place following a third successive loss in the league.

Three Rock Rovers 3 (R McCollum, C Empey, M Samuel) Lisnagarvey 1 (D Buser)
An injury-hit Three Rock Rovers made it four wins in succession in 2017 as they got the better of reigning champions Lisnagarvey 3-1 at Grange Road on day 13 of the men’s EY Hockey League in front of 300 fans.

Rovers were without the services of Ross Canning, Jody Hosking and recently capped Irish international Ben Walker and they lost Garry Ringwood to a hamstring injury 10 minutes in, too.

Nonetheless, in an even first half, they came out on top 1-0 as Rob McCollum scored the only goal in his EYHL debut. He was in the right place to finish off from Ravin Nair’s crash ball – via Mitch Darling – in the 26th minute. The lead was doubled after the break when Conor Empey got to the baseline and opportunistically spotted a way past James Milliken who gambled on him pulling the ball back to another forward.

Garvey did win five corners while Sean Murray made a couple of mazy runs as they looked to get back into the tie. And they got on the board when Daniel Buser nicked in front of Jamie Carr to touch home for 2-1. But Rovers replied once again with Mark Samuel tearing clear from halfway with the ball to out-strip all comers and he flicked his finish over the advancing keeper – a third Rovers teenager to get on the score sheet. Carr kept out the final quarter chances to move Rovers into second place.

Cork C of I 1 (A Power) Railway Union 4 (R Forrest 2, P Catchpole, S McKeever)
Two first quarter goals set Railway Union up for a win for the second year in a row at Garryduff in an entertaining encounter with Cork C of I. The result lifts Railway out of the relegation playoff place while C of I’s title hopes took a big dent.

The hosts had made a bright start but, following one attack, Railway broke and were awarded a corner. Mark English’s drag was stopped on the line by a defenders foot. Before a stroke could be given, former C of I player Peter Catchpole was on hand to sweep in to give Railway the lead. Straight from the tip off, Railway stole the ball from a hesitant C of I midfielder and the ball fell to Richard Forrest to give Railway a two goal lead.

With 20 seconds of the quarter remaining, CofI thought they had one back when Julian Dale’s run into the circle resulted in the ball falling to Philip Sweetnam to touch in but following umpire consultation it was ruled out for an infringement, much to the displeasure of the home crowd.

The second quarter was dominated by Cork C of I but they failed to penetrate a Railway defence, well marshalled by Kenny Carroll, retaining the 2-0 lead. And Carroll played a key role in extending the lead within two minutes of the change of ends.

He found Catchpole on the edge of the D who passed to Forrest to sweep in for his second and Railway’s third. A minute after that, following a C of I corner, Railway won a corner from the break and a switch left allowed Simon McKeever to drag high into the net for Railway’s fourth.

Cork C of I kept fighting but another former C of I man – Adam O’Callaghan – was on hand twice to sweep up when a Cork goal seemed more likely. Eventually, their duck was broken when Shrew Power touched in a ball played into the circle from afar. But the hosts could not make further inroads as Dale saw yellow, summing up their frustrations in a surprise 4-1 defeat.

Instonians 3 (S Kelso, W Robinson, M Irwin) UCD 1 (J Duncan)
Instonians finally broke their winning duck in the men’s EY Hockey League to give them hope they can escape the bottom rung of the table and automatic relegation. For UCD, it was a seventh successive defeat and sees them fall into the relegation playoff place. 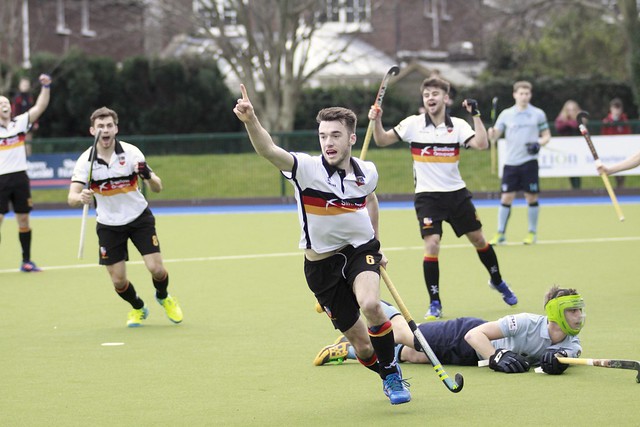 Both teams started cautiously but Instonians looked the more confident and a William Robinson penalty corner in the ninth minute gave them the lead. The Belfast side continued to hold more of the play and missed two further opportunities to be more in control before half-time.

UCD came more into the tie in the second half as the game became fractious with both sides enduring sin-binnings and the narrow gap endured into a lively final quarter and an incredible finale. After a period of pressure by the students, they won a penalty corner and, despite Sam Brown’s best efforts, Jeremy Duncan scored the equaliser with the ball going in off the crossbar. This goal came on 66 minutes.

For Inst, it was a sense of déjà vu having shipped a number of late goals to drop points. This time, knowing they needed points, they went on all out attack and, after a number of good saves by Conor Quinn, Mark Irwin forced the ball over the line. The goal was hotly disputed by UCD but it stood for a 69th minute lead.

UCD took off their goalkeeper only for William Robinson to throw a long overhead ball to Stephen Kelso who slotted it into an empty goal for 3-1 and a maiden victory.

Pembroke 5 (A Sothern 3, S Furlong, E Goode) Glenanne 2 (S Brownlow, S O’Donoghue)
Pembroke came from 2-0 down in the first quarter to beat Glenanne 5-2 to rise into a share of fifth place with Monkstown while the Glens remain in seventh.

The Tallaght side were quickly out of the blocks, Stephen Brownlow scoring from their second corner. Soon after, Shane O’Donoghue doubled up as Pembroke struggled to get out of their own half and their issues were added to when Jack Ryan got a yellow card for a rough tackle in the 12th minute.

Glenanne initially had the best of the second quarter, too, winning further corners but no more goals as Mark Ingram, Harry Spain and John Brennan working hard at the back. But they gradually got back into the game and got one back via Scott Furlong’s corner rebound, a 2-1 deficit at half-time. And the hosts built on that momentum in the second half, drawing some fine stops from Leo Micklem before Alan Sothern levelled the game with a deft touch in front of the keeper from a long crash ball.

The comeback was complete when Elliott Goode got the final touch for a third Pembroke goal while the Glens had a man in the sin-bin in the 49th minute. They rubber-stamped their authority on the game when Ryan produced some excellent play by the baseline to find Sothern to score for 4-2. The Olympian completed his hat trick in the 63rd minute to close out the win.