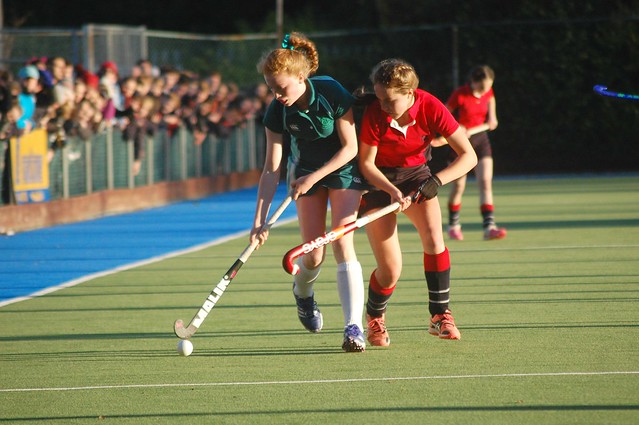 The Goatstown school were just a couple of minutes from winning the tie in normal time after Anna Dignam’s piledriver gave them the lead early in the second half. Dignam was the game’s dominant force in centre midfield with her close skills and eye for a pass a key feature throughout.

But Favour Ochonma equalised with four minutes left from an acute angle to send the game to the shoot-out. The regulation series ended 3-3 with goalkeepers Holly Micklem from Wesley and Chloe Connell from Anville made two big saves.

Connell kept out Wesley’s sixth effort in sudden death, handing Keane the chance to win the tie and she coolly converted for victory.

Wesley in the shoot-out against Mount Anville

Played in front of a large and boisterous crowd, augmented by Mount Anville’s aquamarine elephant and the more casually attired Wesley dragon, it was a typically colourful occasion with the pre-match music blaring on both sidelines.

Anville were first to attack in anger in the first minute and they had the best of a scoreless first half. Sadhbh Daly’s reverse-stick shot, spinning on a six-pence in mid-circle, fizzed by the left post as Dignam kept things ticking over in midfield.

India Cotter’s mazy runs were also a feature while Lisa Mulcahy was the controlling influence from the back. They had one corner but it was well-defended.

Wesley, however, went the closest to breaking the deadlock when Aoife O’Connor broke through in the 19th minute. Her shot clipped the inside of the post and somehow bounced back and was cleared to safety.

Dignam gave her side from her team’s third corner, coming early in the second half after Anna Tarpey robbed the ball from the last defender to win the set piece.

After a phase on the back foot, with Emily McKay and Emma Paul working well together, Wesley forged their way back into the game with Hannah McGrane pushing things on from midfield.

And they got their big break when Lara Gillespie’s disguised pass from the 23m line found Ochomna on the baseline and she picked her spot for the equaliser.

It led to the shoot-out in which Mount Anville always had the edge, leading 1-0 after the first round and 2-1 after three. Wesley kept fighting back and got level in round four before both sides converted in the fifth round to send it to suddent death.

Connell kept out the sixth Wesley effort, giving Keane the chance to win the game and she duly scored to open the floodgates of fans onto the field.