The result sees Wes just about cling on to a sliver of hope of a final four spot, themselves, but they really needed the victory, a fact reflected in coach Johnny Harte’s decision to withdraw his goalkeeper for an extra outfielder in pursuit of a winner.

Such an outcome looked unlikely midway through the second half after Mount Anville had dominated this tie for long periods with the pace of Niamh Gowing and Natasha Twomey causing constant problems. 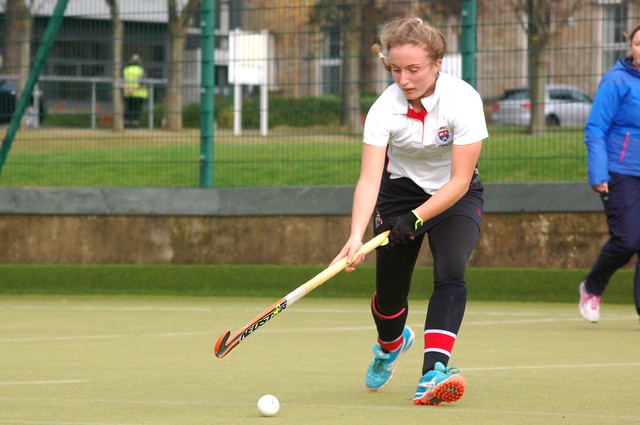 Wesley had gone in front via Jodie Douglas’s powerful corner hit barely two minutes into the tie. From there, the hosts – with Katie Ronan and Claudia Cotter prompting the attacks – pushed on progressively further and further, requiring Leah Paul to make multiple key tackles at the centre of defence.

Parity came just before the break when Rachel Moore’s delightfully weighted diagonal pass from the left sideline was latched onto by Gowing. Beyond the last defender, she controlled well, drifted left and finished coolly for 1-1.

Soon after half-time, Chelsea Sandford got on the end of a right-wing attack to make it 2-1 and it looked like Mount Anville were en route to a fifth win in six outings.

But they never killed off the game and Wesley upped the intensity, sniffing an opportunity in the closing ten minutes. And they got their chance when the lethal McGrane was located alone on the top right of the circle and she arrowed a perfect shot into the bottom left corner, thudding the backboard.

Muckross, courtesy of Saturday’s 2-0 win over Holy Child Killiney, lead Section B on 17 points with Mount Anville on 16. Both Loreto Foxrock and Wesley are on 15 points.

As such, Muckross’s final game against Loreto Foxrock is a crucial one. Mount Anville will anticipate full points from their remaining games against Mount Sackville (December 13) and Loreto Stephen’s Green (December 14) in order to pin down their progression.

Wesley need a series of unlikely favours in addition to a win over Mount Sackville.

In Section A, St Andrew’s moved into a strong position for qualification for the semi-finals thanks to a 3-1 win over Loreto Dalkey last Saturday morning. It pushes them up to 17 points with only Loreto Beaufort able to oust them in the race for second place.

Andrew’s are on 17 points but with a game extra played than Beaufort on 14. The former meet Mount Temple in their final group game while Beaufort face a tester against a King’s Hospital side that beat Mount Temple in midweek. Alexandra College, with seven wins from seven, have already topped the section.