Reigning champions Corinthian will play Pembroke in the Mills Cup final following their respective wins over YMCA and Three Rock Rovers this week, setting up a showdown on St Patrick’s Day at Grange Road.

The Reds were 1-0 winners on Sunday as Rob McKenna’s goal proved the only difference at Wesley, recording their second win of the campaign against the Y.

They protected their lead well with Ross Murray impressing between the posts to record a clean sheet for the second successive round having eliminated Monkstown in the quarter-final.

On Tuesday evening, Pembroke were 3-2 winners over Rovers with Alan Sothern’s penalty stroke with a couple of minutes to go proving the difference at Serpentine Avenue.

Sothern and Jack Ryan had shared goals with a pair from Ross Canning to make the tie 2-2 deep into the second half before the stroke won the night. 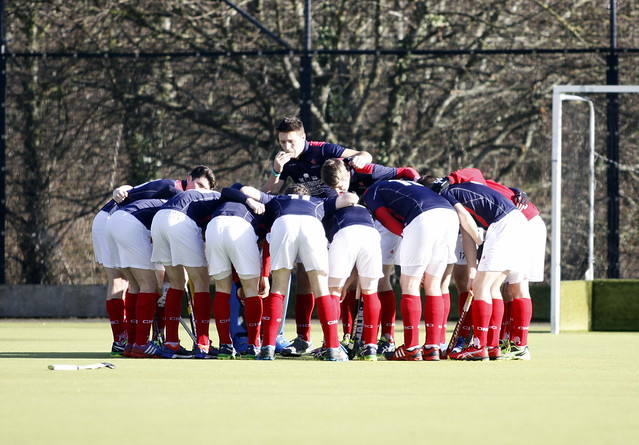 In Leinster Division 1A, Corinthian, Clontarf and YMCA all remain unbeaten at this early stage in the group after the latter pair drew 2-2 on Saturday afternoon.

YM took the lead after a free was reversed on their own 23m line and they countered with devastaing effect, breaking up the pitch, setting up Andrew Jones to slap into the backboard.

Tarf levelled via Cain Cooney from a free outside the 23, getting a touch to a crash ball. Parity did not last long, though, as Ben Campbell finished off an overload from midfield to make it 2-1 in the 26th minute.

It remained that way until the 60th minute when Kevin Mullins ripped the ball off a YM centre back before feeding his brother John to finish low into the corner. It was the second Bulls’ goal to come while YM were down a man due to a card.

Iain Walker made a few cracking saves (see below), picking one out of the top corner while both teams had chances to win the game in the last five minutes but none were taken.

On Sunday, Tarf beat Monkstown II 3-1 to reach the Railway Cup final and they could potentially play their seconds in the final – they play Railway Union II next weekend.

Avoca and UCD drew 1-1 in their respective third games of the season, meaning they have ground to catch up on the top three and will need to start taking points off those above them if they are to grab a place in the promotion playoffs.

Avoca meet Clontarf on Saturday to try and do just that while Corinthian meet YMCA for a third time this season seeking a third win over their rivals.

In Division 1B, Dublin University have made it three wins from three with a 2-1 win over Fingal last Saturday and a 1-0 success against Rathgar on Tuesday courtesy of a Rory Nichols’ goal.