Men’s EY Hockey League – day 11 round-up
Annadale 1 (James Cox) Cork C of I 1 (Andrew Daunt)
James Cox snatched a last gasp draw for Annadale to deny Cork C of I a first win since October for what could be an important point for the Lough Moss side in their bid to avoid relegation. C of I had the first major chance with a fifth minute penalty corner which Richard Sweetnam flicked goalward but saw Peter McKibbin save well on the line. Otherwise, defences were dominant.

The second quarter followed a similar pattern as Robbie McGuire and Andrew McKibbin worked hard for Dale but no clear-cut chance was produced. Out of nothing, though, C of I’s Andrew Daunt was allowed break unchallenged into the circle and produced a stunning reverse stick shot for a 26th minute lead.

The hosts pushed forward in the second half and created two good chances, Chris Campbell going close on the reverse both times but Billy Lynch was able to block both. Daunt broke clear but Jonny Moore denied him a second goal in the one-on-one chance.

It kept the minimum between the sides going into the final quarter. Cork’s defence, marshalled by Andrew Gray and Sweetnam, continued to stand firm in ever more regular attacks. Annadale eventually won just their second corner in the dying seconds and Cox whipped it home for second goal in as many weeks to nick the draw.

Pembroke 0 Monkstown 3 (Peter Caruth, Lee Cole, Geoff Cole)
Monkstown continued their dominance over Pembroke with a third comprehensive win of the campaign over their Dublin rivals Pembroke, running out 3-0 winners. The result moves them four points clear of Banbridge, strengthening their hold on the second EY Champions Trophy place.

Most of the damage was done in the opening quarter with the opening goal taking just three minutes to arrive. Pembroke attempted to run the ball out of defence with Gareth Watkins quicly transferring the ball forward to Pete Caruth at the back post to hammer into the net.

It became 2-0 from a corner when an initial shot was saved but Geoff Cole gobbled up the rebound in the 11th minute. Monkstown continued to press in the early stages of the second quarter, keeping Harry Spain, Keith O’Hare and Adam Pritchard very busy. 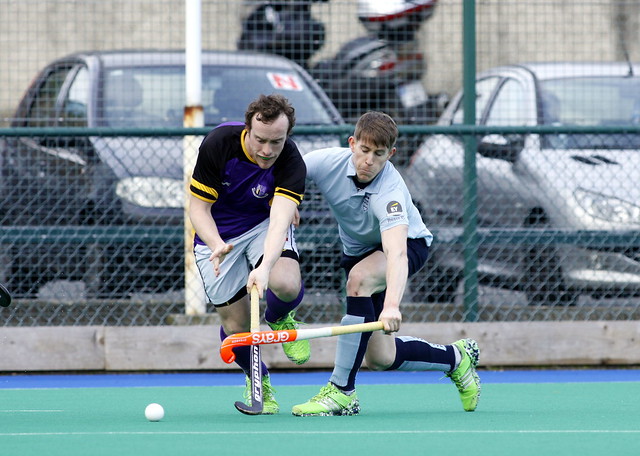 Pembroke did win their first corner on 26 minutes but it was cleared to keep the two-goal gap in place at half-time. And the games was effectively put to bed in the 36th minute following a corner switch which was pushed into the far corner by Lee Cole.

The fourth quarter became a bit of a battle, losing its fluidity, with Jonny Bruton, Karl Smith and Ronan Flannery spending time in the sin-bin but it had little impact on the final outcome.

Lisnagarvey 4 (D Buser 2, A Williamson, T Cockram) Banbridge 0
Lisnagarvey defeated Banbridge 4-0 at Comber Road as a late brace by Daniel Buser secured the points following a prolonged period of intense Banbridge pressure. The result sees Garvey retain their seven-point gap at the top of the division, seeing off one of their major rivals for the second successive week.

Andy Williamson gave Garvey a great start in a tight opening quarter as Mikey Watt continued his fine form, getting to the right baseline. He pulled the ball back to Andy Williamson who had time to control and flick into the net.

The second quarter flowed from end to end with Buser’s first time lob going close to a second for Garvey while Timmy Cockram’s drag-flick – from a corner won by Watt – extended the advantage to 2-0.

But Bann were well up for the challenge. Eugene Magee went within inches of getting one back from a corner, which he pulled onto his reverse and pinged the frame of the goal. A second corner from Stephen Dowds was deflected wide.

Owen Magee saw yellow early in the second half for a heavy tackle while Cockram took a green card. For the most part, Garvey were absorbing pressure but they still had danger on the counter when James Lorimer went close.

John Tormey shut down another couple of Eugene Magee corner efforts to keep it 2-0 at the three quarter mark. Further corners were kept out in the early stages of the final quarter with Tormey denying Dowds while Williamson charged down another set piece.

But any thoughts of a comeback were put to bed in the last six minutes. A long overhead caught Bann too high up the pitch. Cockram’s shot was blocked but Buser followed up for 3-0. Watt then wriggled along the baseline to find Buser whose first time slap added more gloss to the scoreline.

Indeed, only Mark English’s shot counted as a chance of note in the first quarter as Railway held more possession while Three Rock sat deep and looked to counter. Jody Hosking’s quick-thinking almost unlocked the door for Rovers in the second period when his quick free saw his cross flash across the face of goal.

Railway had a couple more clear chances with Mateusz Nowakowski brilliantly shut down by Jamie Carr while he also blocked an English close range effort. Early in the second half, though, they succumbed to the Rovers’ half-court trap, losing the ball in midfield and they quickly countered down the left wing, working the ball to Harry Morris who deflected home for 1-0.

In reply, James Dick hit the post to deny Railway an equaliser. They also had a series of final quarter corners, two of which were charged down while the third hit the net but too high from English’s first-up strike.

It sets up two big games between the sides in the next couple of weeks in the battle to avoid the bottom rung of the table. This was their second win of the campaign against Glenanne who had been riding high in recent times.
Greg Allen and Shannon Boucher exchanged early goals while Ryan Millar and Joe Brennan did likewise before Andrew McWhirter carried the day for Cookstown.