In a high tempo start, Watkins gave her side the lead from the first corner of the game with a lovely drag-flick. She doubled up soon after with a straight strike, carrying her good form from the Irish international team in midweek against Spain to the domestic stage.

UCD endeavoured to bounce back and forced a number of good saves from Emma Gray from penalty corners and Hermes countered to brilliant effect. Sarah Patton was causing havoc with her pace throughout down the right flank and she set up Anna O’Flanagan for the third goal in the 26th minute, the power of the shot too much for Clodagh Cassin.

Hermes defence, marshalled by Sarah Greene and Christine Quinlan, were giving nothing away. From this base, Greene picked out Nikki Evans with a lovely ball to Nikki Evans who drove forward and played a lovely give and go with Sinead Loughran. The final pass to Naomi Carroll gave her the easiest of chances to tap in at the back post.

They held that 4-0 lead until the end. Hermes can extend their lead in the division to 12 points next Sunday should they win their refixed match with UCC.

Cork Harlequins 0 Railway Union 3 (Kate Dillon, Julia O’Halloran, Zara Delany)
Railway Union strengthened their place in second of the women’s EY Hockey League with a strong away win at Cork Harlequins – a side who could have overtaken them had the result been reversed – at Farmer’s Cross.

The Sandymount side came out of the traps the faster, camping in the Harlequins’ half. Kate Dillon had the best of the early chances but was denied one-on-one by the home goalkeeper Emma Buckley.

Harlequins, who were without captain Cliodhna Sargent, came more in to the game as the quarter went on. Rachel Hobbs found herself in on goal but Grace O’Flanagan saved well from a tight angle. The Cork side had the only corner of the first 15 minutes where an Olivia Roycroft drag flick well saved again by the Railway keeper.

In the second corner, A defensive lapse from Harlequins and some quick attacking play from Michelle Carey in the 20th minute led to a huge three versus one overload situation. Dillon made no mistake as she tapped in at the back post. Within a minute of the goal, Railway forced their first penalty corner which was well saved by Buckley, keeping the gap at 1-0 into the big break.

Early in the second half, Emma Smyth received a yellow card but the shortened numbers didn’t impede Railway as they scored from their next attack. Julia O’Halloran – against her former club – found herself unmarked at the back post and finished off from close range for 2-0. Zara Delany and Dillon played the key roles in its creation.

The Dubliners continued to hold more of the ball and the majority of territorial advantage but were foiled in their search for further goals by the efforts of Yvonne O’Byrne for Harlequins.

The weather continued to worsen into the fourth quarter with the rain ramping up. Harlequins upped the tempo and forced two penalty corners within the first five minutes of the period but were unable to capitalise.

O’Byrne started to get on the ball more for the home side but it was Railway who made the game safe in the 52nd minute. Zara Delany, who impressed all afternoon, slammed home from close to the penalty spot after the ball broke her way from Michelle Carey’s assist. 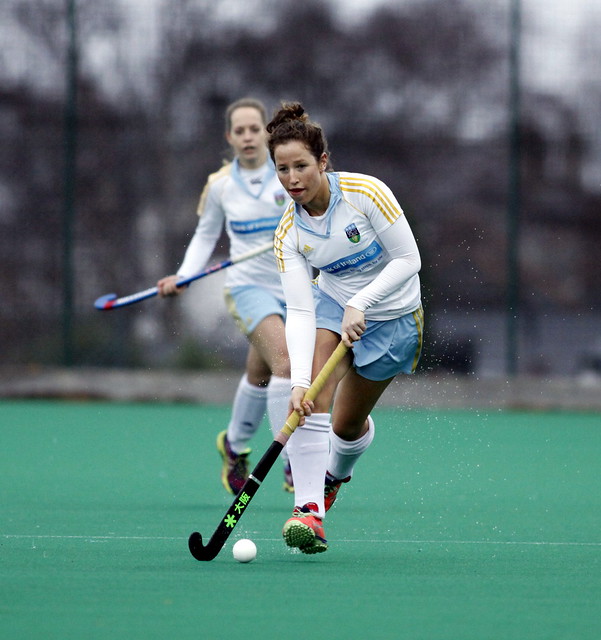 The result sees Railway sit in second place, two points clear of Pegasus with Cork Harlequins dropping to sixth but still in contact with the playoff places.

Pembroke 3 (Sarah Clarke, Caroline Hill, Orla Macken) Ulster Elks 1 (Hannah Irwin)
Pembroke claimed their first win in four attempts to reignite their push for the playoff places, coming from a goal down at half-time to defeat the Ulster Elks and rise to fifth place in the division.

After a scoreless first quarter, the Elks stepped up the pressure after the re-start and took the Pembroke defence by surprise when, in the 22nd minute, Hannah Irwin’s shot found the back of the net. After the break, though, Pembroke made all the decisive moves. They were awarded a penalty corner in the 39th minute which was slammed home by Sarah Clarke. Elks were reduced to 10 players for a short period which allowed Pembroke to build further the momentum.

And they duly won the tie in the closing quarter. The second goal was created by good work up the left wing by Jill Collins who switched the ball to the right to Caroline Hill who made no mistake in finding the net.

The Elks responded well through Shirley McCay whose shot was saved by Jessie Elliott in the Pembroke goal. It set the base for a pitch-length counter which was picked up by Orla Macken at the edge of the circle and she made no mistake for 3-1.

Pegasus 2 (Suzanne Ferris, Alex Speers) Ards 1 (Chloe Brown)
Pegasus made it six wins in seven games to move into the top three in the division for the first time this season, getting one over on their Ulster rivals Ards who drop into ninth place.

They got off to a flying start with Hannah Grieve picking out Suzanne Ferris in mid-circle and the ace striker brilliantly flipped the ball onto her backhand and, on the dive, fired passed the Ards’ keeper.

The pace of the match was high despite much of the game being played between the 23m lines while both teams held firm against penalty corner chances, keeping the narrow 1-0 lead in place for a long time.

It remained that way until the 48th minute when Pegasus didn’t clear their lines and the ball was worked to Chloe Brown who shot home from 10 yards out.

Pegasus were intent on not letting Ards back in and upped the pace and were rewarded with what turned out to be the winner when a great run from Hannah McMillan saw her find Alex Speers in the circle who finished off low into the net.

Two minutes later, Sammy Jo Greer pulled off the save of the match to keep Pegasus ahead; a diving stick save to her right from a drag flick. It kept their 2-1 lead in tact and continues their move up the charts.

UCC 2 (Nicola Kerr 2) Greenfields 1 (Maeve Hughes)
First quarter goals from Nicola Kerr saw UCC claim their third win of the EYHL season, moving them out of the relegation playoff place for the first time since October as they jumped ahead of Ards.

Captain Kerr had them 2-0 up with precious little time but they did not pull away from the Galway side who fought back and got their second goal of the season via Maeve Hughes. Indeed, it was their closest run result of the campaign as they look to show a more competitive edge in the second half of the campaign.