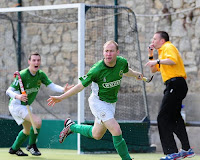 Pembroke and Glenanne have both drawn been handed against giants of the European game for the first round of the EuroHockey League, which gets underway in Barcelona on October 9.

While both sides picked up tough draws, Glenanne’s schedule makes for an intense weekend as they begin their maiden EHL voyage with a Friday afternoon game (4.30pm) against 2008 champions Uhlenhorst Hamburg before retaking the field against Grunwald Poznan under 20 hours later, 12.30pm on the Saturday afternoon.

It was the nightmare scenario coach Arul Anthoni told The Hook he was hoping to avoid last week when the opponents were made known.

Uhlenhorster will be without goalkeeper Johannes Blank while Scottish international Niall Stott has moved to English club hockey but the Germans still represent a monumental task with Moritz Furste, (pictured, right) one of world hockey’s best talents, leading the way.

With two of the three teams to qualify for the KO16 round, it means a lot of pressure is likely to be placed on the match against the Polish champions.

Many of the Poles will be familiar to Irish audiences having represented their country in the Champion’s Challenge II. Defender Tomasz Duktiewicz scored the vital winner in the group stages while Slawomir Choczaj, Marcin Strykowski, Miroslaw Kluczynski and Tomasz Choczaj are all experienced internationals. Poznan reached the last 16 in 2008/09, losing 4-2 to Rotterdam in Hamburg.

Pembroke have a kinder schedule with a Friday and Sunday game and will hope to overturn the nightmare ending to their first EHL adventure when, needing a draw to advance, they let a 2-0 half-time lead slip against KS Pocztowiec Poznan.

And while John McInroy and Ian Symons have moved on from that team, they are arguably in much better shape this time around with Tim Lewis, the Harte twins and Alan Sothern developing immensely.

They play Scottish champions of the past five years Kelburne on the Friday evening (6.30pm) in what could be the make or break group game.

Dutch giants Rotterdam, with their multi-cultural mix of international stars, are the opponents on the Sunday (2.30pm).

But, on balance, Pembroke head coach Craig Fulton is happy with how things panned out. “It’s a good draw but obviously Kelburne are thinking we’re a good draw too. We’re real underdogs against Rotterdam so it’s a dogfight between us and Kelburne if we’re perfectly honest.

As for the Rotterdam threat, he says “We play every game to win. Whether or not we get it right on the day, well… I’m not putting them up on a pedestal but I’m not saying they are not as good as they are.

“They’re the biggest club in Europe so when you go in there you’ve got to respect them; you’ve got to do your homework. But in those games you worry about yourselves; you don’t really worry about what they have to offer. To be honest, if you do it any other way, the task becomes too daunting especially when it’s one of the best teams in Europe.”

And he adds that the two Irish teams being drawn in the first set of EHL round one group games was a great boost, considering potential complications with the national team:

“If there was anything we could have wished for, from an Irish point of view, it was that situation. From an Irish perspective having both teams that weekend is pretty important. It’s all guns blazing from now.”

* For the full draw, fixtures and times, click here. It has yet to be confirmed whether the tournament will be played in either the Polo or Terrassa club in the city. Both are drawn in this round of matches.