Ireland’s go into this week’s EuroHockey Nation’s Trophy in Wrexham with expectation rather than hope as they aim to regain A division status from this summer’s key international tournament.

Three targets are rolled into one event as Paul Revington’s side will be gunning not only for the Trophy but the promotion that comes with reaching the final and a place in a World Cup qualifier – set for November – for the top-five entrants.

His side are included in a group which holds the slight banana-skins of Belarus, Italy and Russia but Ireland – ranked at least five places higher than any of the other competing nations – will expect to prevail.

But, given that many of his panel play for the most successful club teams in Ireland, Revington does not believe the side will be unduly burdened by any weight of expectation on their shoulders.

Asked how his side will respond to the tag of favourites, he said: “There should be a couple of sides that people will expect to be in the top three or four at the end but we have to be in that group. That’s just reality and the guys understand that. I don’t think it’s a problem.

“With their clubs, they’re used to when they play in club competitions having to produce and to perform so they should be able to deal with it.

“The nature of players we’re dealing with, there’s a lot of fresh players who are playing a main role in the team for the first time. They want to win games and to perform and do well for each other and Irish hockey. They’re not carrying any old baggage. That’s probably why the spirit and the excitement in the camp is high.”

Of the Champion’s Challenge II squad, Mikey Watt (broken thumb) and Andy McConnell (exams) are unavailable but Revington does not feel their absence will cause undue problems for the panel.

“The majority of the side is still playing so they’re as excited as they were before the Champ’s Challenge. They understand the importance of the event. The last couple of days we’ve had in Cork have been good, they’ve been lively so I’m pretty happy at the moment.”

The campaign starts on Saturday morning against Belarus for whom the main threat comes from Aliaksandr Radzivinovich whose monster overheads and drag-flicks for Stroitel Brest caught the eye in the EuroHockey Club Trophy in April.

He fired in two corner strikes past David Harte that day but Ireland should be well-equipped to deal with the Belarussians physical game.

Italy follow up on Sunday with rising star Daniele Cioli – who plied his trade with DSD Dussledorf in the EHL this season – leading the line.

Plenty of video analysis, meanwhile, will be available on third opponents Russia who ended sixth at the recent Champion’s Challenge II. Alexey Mayo 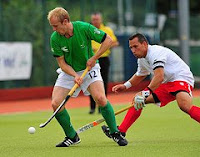 rov – who could yet join Phelie Maguire at KHC Leuven – is one to watch as one of the top scorers from play at the Junior World Cup.

However, Ireland should have – even without Watt – enough strike power of their own to cause damage, especially if a high corner count is obtained.

And Revington believes if his side sticks to their own task then the side should prevail. “We have a fair idea of what we’re expecting. There’s one or two decent players on every international side and we need to make sure we’re prepared properly for that. But we’ve to rely on our own ability and the way we play to produce.”
Bolger elevated to international status
EuroHockey Nation's Trophy: Ireland 2 Belarus 1