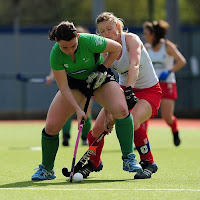 Lizzie Colvin (pictured) came off the bench for the second time in two days to score, this time earning Ireland with a levelling goal in today’s 1-1 draw with Ukraine in the second group game of the Champions Challenge.

Colvin struck in the 59th minute from a switched penalty corner – Ireland’s fourth of the game. It came just two minutes after Ireland had fallen behind as Maryna Vynohradova had given Ukraine the lead when she was left unmarked in the circle following a cheap turnover.

The result means the pair top the group with Ireland marginally ahead on goal difference going into their final group game with Malaysia early on Wednesday morning but will be hoping Eimear Cregan will see some action. She has missed the opening two fixtures due to an ankle injury.

Ukraine had started this fixture the stronger, holding the guts of possession and territory. The influence of Nikki Symmons and Michelle Harvey, though, in midfield led to greater stability after the turnaround as Ireland gained a greater foothold in the game.

Speaking afterwards, Gene Muller said of the match: “It was a very tough match for us. It was a battle, but after going a goal down we stayed in contention to come back and tie the match. Overall, I was very happy with our performance.”

His side need just a point to advance to the semi-finals of the competition after Malaysia and Russia drew 2-2. India, meanwhile, are the team to beat in Pool A, with two wins and 13 goals to date.