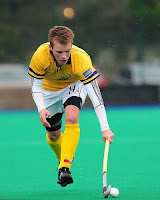 Andy Smyth has named his 18-strong panel for this Summer’s EuroHockey Youth Nation’s Trophy to be held in Austria in July. Eleven players remain from the U-18 side that claimed Four-Nations’ success in early August last year in Cardiff, while the side will continue to be captained by Stuart Loughrey (right).

In making his selection, Smyth praised the players for their dedication in spite of mounting academic concerns at this time of year.
“This has been an incredible group to work with so far. The attitude and commitment they have shown in the face of exam pressures has been superb. It was a real challenge for the coaching staff to cut to 18 players as the quality throughout the training squad was so high.
“Those players who have missed out will have an opportunity to train with the squad right up to the tournament such was the close margin for selection.”
Six Leinster players make the tournament panel but St Andrews’ skipper Cian Speers (pictured, left) is unable to travel with the team due to injury.
Smyth added: “My heart goes out to Cian who had a excellent tour of Belgium but has unfortunately broken his arm. These things happen in sport and Cian will react well to this setback and will come back stronger for it next year.
“Currently the most important things for those selected is to focus on their exams and keep a good level of physical conditioning. We have gone to regional sessions for the next month in order to minimise travel and maximise study time before coming together again at the end of June for matches vs Scotland .”