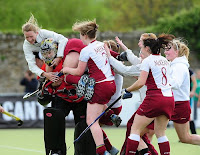 Loreto claimed the inaugural Irish Hockey League at Grange Road becoming the first side in the world to win a title on the new penalty one-on-one format.

Louisa Healy proved the heroine in the final reckoning, denying both Jenny Burke and Chloe Watkins in the shoot-out to win the best-of-three competition 2-1.

It meant a first ever victory in the countries top event after numerous near misses in the Club Championships – the forerunner to the IHL – notably overturning last season’s golden goal defeat to Hermes.

The result was hard won following a pulsating 80 minutes of action, full of goalmouth intrigue despite the lack of goals.

Indeed, Loreto twice thought they had a crucial opener – first when Nikki Symmons superb reverse-stick cross was adjudged to have been deflected in by Ali Meeke. Initially awarded, Meeke’s body language suggested she got no so such touch and the effort was chalked once the umpires conferred.

More dramatically, Cathy McKean smashed home in the first period of extra-time before play was pulled back for an earlier Nikki Keegan foot.

The chances, though, were not all confined to one end as Nikki Evans – a hat-trick heroine in Saturday’s semi-final against Cork Harlequins – flashed narrowly wide from Jenny Burke’s quickly taken long corner in the second quarter.

Indeed, Hermes had near total dominance of the second period following an even opening phase.

Gillian Pinder came off the bench to great effect, creating a series of chances and winning a couple of corners. 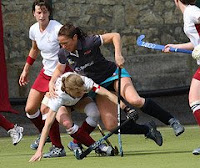 Indeed, numerous penalty corner chances came and went though the feeling was that Hermes were over-complicating the set-piece rather than taking the direct route which served them well for their fourth goal against Harlequins.

The third quarter, though, saw an about-turn in momentum as Nikki Symmons escaped the shackles of Linda Caulfield in midfield. Her first act of the second half was to fire that superlative cross which just evaded Meeke’s stick and her combination work with McKean and Niamh Small on the right wing proved a near constant threat.

McKean was twice denied by an out-rushing Emma Gray before almost nicking the win outright in the final 15 seconds of normal time with a reverse that clattered the sideboard.

Moments prior, Aisling Campion picked up a nasty arm injury that required a sling.

Extra-time again produced a series of corners but little more leading to the new penalty competition.

Loreto’s Nikki Keegan and Cathy McKean both scored to take the initiative while Anna O’Flanagan was awarded a penalty goal as Healy committed a stick-foul.

But Healy’s pair of saves from Burke and Watkins proved vital to give the Beaufort side the biggest title in the club’s history.

Zara Delany, meanwhile, picked up the top scorer of the competition to round off a double boon a week into her recovery from a cruciate injury.