Virtually all the Leinster women’s leagues have come to a conclusion in the past fortnight. Here’s a quick round-up of whose going up and down across the divisions as well as a couple of cup finals last Sunday:

Division Two:
One of the few issues yet to be resolved this season is the destination of the division two title with Loreto II and Railway Union II the two sides who are potential winners. Loreto must wait anxiously for Railway to play their last two matches against Hermes II (April 8) and a Skerries (April 20) side looking to escape relegation.
Genesis (pictured above left), currently in fourth, are the highest placed first team in the division but not near enough to the top to take an automatic promotion place and must now play-off with Corinthian for division one status at a date to be decided.
At the bottom, Our Lady’s drop out of the division with either Skerries or Clontarf to follow.
Division Three:
North Kildare were one of the first sides to pick up a league title as they eased to the divisional title. Pembroke III took second spot with a crucial final day win over the Kilcock-based side which kept their nose just in front of the chasing Corinthian II and Suttonians. Sutton picked up the division three/four cup with a 2-1 win over Bray.
North Kildare, meanwhile, are hoping to have an astroturf pitch in place at the Maws in time for the 2009/10 season.
Three Rock Ladies II (pictured, right) went down after a mid-season slump in one of the tightest divisions, having occupied the top half of the table in December. Diocesan picked up 18 points but still came ninth and also face the drop. 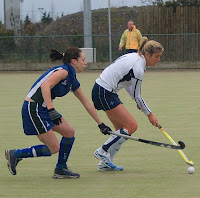 Division Four:
Rowland Rixon-Fuller’s Muckross added division four to their decent cup run in the Irish Hockey Trophy to make it a successful season as the Teresians-based club continues their rebuilding process.
Cup finalists Bray II will join them after they won the last game of the season against Trinity II 5-0 to push Weston out of the promotion places. Clontarf II and Corinthian III are relegated.
Division Five:
Naas translated top league form into a decent IHC cup run which was only ended after extra time by Fermoy. Consolation was quick to come, though, as they took the league with an immaculate nine wins from nine on the road. They followed up with cup success on Sunday, beating Swords 2-1 powered on by Tracey Dunlop.
Railway Union III took second in spite of a one-point penalty while Loreto IV and Fingal II propped up the table.
Division Six:
North Kildare II added to the success story around the Maws, topping division six, leading home Navan by two points. At the bottom, Loreto V drop a league while Tullamore have one last chance to escape the same fate with a refix against North Kildare. If they gain three points, Old Alex IV will end in ninth place.
Division Seven:
Skerries II took the league win with a dramatic 2-0 win over Bray III last Saturday to leap-frog Newbridge II – who have a cup final against Hermes III to come later this month. They end in second with Bray just outside the promotion places in third. Our Lady’s III and Corinthian IV occupy the last two spaces. 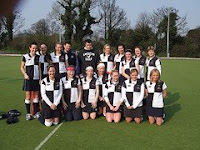 Dalkey (left) continue their rise through the divisions as they sealed the title in mid-March. Suttonians II follow them up to division seven while Diocesan III and UCD IV go down.
Division Nine:
A 100pc league record and an IHC title, YMCA (below right) completed a perfect season at Grange Road on Sunday when they beat Old Alex V 2-0 in the division 9/10 cup final. With a goal difference of +83, YM look like they can definitely hold their own quite a few divisions higher.
Malahide were best of the rest, garnering 46 points which would have assured the league in the vast majority of the other final tables. Loreto VI and Genesis V were ninth and tenth respectively.
Division Ten:
Old Alex V’s may have been denied a double by the mighty YMCA but did have a league title in the bank to ease their worries. Bray IV go up with Tullamore II and Fingal III going the other way.
Division Eleven:
Avoca II took division eleven in emphatic style, taking the eight-

team table by a massive eleven points from Corinthian V. Loreto VII were bottom of the table but league restructuring may ensue at this level of competition due to number of teams left in the table as a result of Three Rock Ladies V withdrawal.
Division Twelve:
Only the league’s most crucial fixture remains as Naas III and Mullingar occupy the top two slots. Naas have a one-point advantage but Mullingar have home comforts in what could be a thrilling end to the season. Pembroke VII came ninth of nine in this table.
Division Thirteen:
Newbridge IV came within one win of a perfect season, dropping just two points all year to take first place. Malahide II follow their first team’s lead and gain promotion too. UCD VI will finish bottom but RCSI have three games left to try and get safe with Skerries III and Phoenix Park II within reach.
Division Fourteen:
Monkstown’s return to women’s hockey has been greeted with a tenth successive promotion, though there has been quite a hiatus between the ninth and tenth. The latter preceded the club changing their moniker to Glenageary United and subsequently disbanding. This vintage has had a hugely impressive first year with an IHC semi-final and a near perfect league record yielding a goal difference of +90. Navan II take second place of the 14 team division.
This week's international schedule
Mixed results for Irish against Belgium