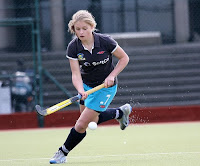 Hermes confirmed their place inside the top three with an opportunity to outdo Loreto in the final round of group matches on April 18 for second place, with their 5-1 win over Corinthian this evening. Such a result may improve chances of gaining three home fixtures when it comes to the IHL draw next season.

Chloe Watkins scored a double to make it a good goalscoring night for the Watkins’ family – Gareth scoring for Ireland A.

For Corinthian, it completes their regular league programme of 18 matches and now have just under a fortnight to prepare for their promotion/relegation playoff with Genesis.
Mixed results for Irish against Belgium
Leinster men's junior round-up