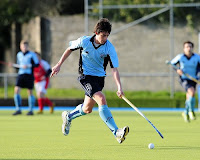 Monkstown won the Under-21 Cup yesterday in Pembroke after a 1-0 win over Glenanne in a pulsating game of hockey.

Andrew Ward (pictured) got the decisive goal with 15 minutes to go after Richard Sykes crash ball took a triple deflection before eventually trickling over the line via David O’Malley’s pad.

The timing of the goal was cruel on Glenanne who had held out for 15 minutes with ten men following consecutive sin binnings for Shane O’Donoghue and Jonathan Kane at the beginning of the second half.

O’Donoghue rattled the post with a late dragflick but they ran out of time.

It was a game in which ‘Town’ enjoyed the majority of possession but failed to really pressurise the Glens goal while the Tallaght side provided a constant threat on the counter attack.

Sam O’Leary came close twice early on but was thwarted by O’Malley on both occasions while Glenanne’s best chances fell to Kane who tested Craig Ellis with a slap hit from a second phase short corner.

Richie Shaw almost opened the scoring late in the half when he intercepted Nick Dee’s pass outside his own circle before running the length of the pitch. However, he failed to connect properly with his reverse shot.

The second half was affected by the two yellow cards for Glens midfielders with Monkstown desperately trying to break the deadlock.

The two corners they earned didn’t go to plan – Shaw got a block on the second one – while Phillip Byrne cleaned up brilliantly elsewhere.

However, with Glenanne back to their full quota, Ward struck. His deflection caught the inside of Alan Mcloughlin’s stick before nicking off O’Malley’s right foot and in.

The eventual victors put in a brilliant performance at the back with Nick Dee particularly impressive while Ward was a constant threat.

Glens put together a spirited final period but despite winning two corners and harrying the Monkstown defence at every opportunity they couldn’t find an equaliser.

* Report thanks to David O’Malley